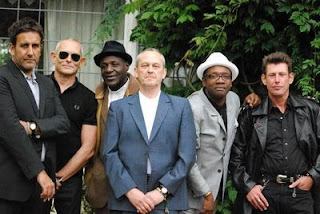 Sadly the news is true. The Specials have announced that they will not be appearing at a free show on Sunday, August 22 at Central Park Summerstage in New York City due to visa issues. The legendary ska pioneers will, however, play their scheduled Toronto dates on Friday August 27th and Saturday August 28th at Sound Academy and plan to return to the US in early 2011 for additional dates. You can read the band statement here.
According to sources inside the band that I spoke with, the problem is that the U.S. government won't issue one of the band members a visa. Band management have been negotiating with the U.S. embassy in London for some time but have failed to secure the necessary documents. Once it became clear that the visa was not forthcoming, the band was forced to cancel the show and hope they can return to the U.S. in January 2011 assuming the issue can be sorted out.
The band's first performance in the U.S. in 29 years was on the Jimmy Fallon Late Night TV show back in April. However toaster/singer Neville Staple was notably absent. The band later cancelled shows in Toronto leading some to speculate that it may be Staple who is the focus of the visa related issues.

Oh yet again the US Government ruins my day! Surprise they just did not make them pay a huge tax to come here and play.

Big downer (I was really looking forward to seeing them at Summerstage)...but from what I have heard off-line, there is more to the Neville story than what is being said. I wouldn't be so quick to blame the Feds on this one...

Hey Steve! I had a feeling there was more to the story and I hope to find out more. Any interest in going to Toronto?