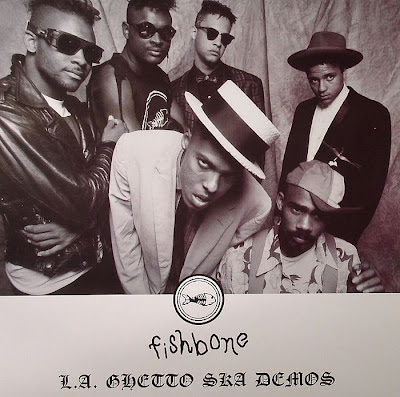 A demo of several ska and reggae songs that the then teen aged members of Fishbone recorded in the early to mid-80's before the band had signed to Sony Records are now available on vinyl. [UPDATE: Two eagle eyed readers of the blog and obsessed fans of the band pointed out that these early demo songs and many more are available on "Fishbone 101: Nuttasaurusmeg Fossil Fuelin' the Fonkay" a two-CD 1996 compilation album. The first disc contains album tracks (some in edited versions) from the Fishbone albums up to 1993. The second disc contains B-sides, alternate versions, EP tracks, demos, and other non-album items. Though the CD is out-of-print, copies can still be purchased and digital versions of the songs are available for download at Amazon. That said. if you want some cool, color vinyl, then by all means grab a copy of L.A. Ghetto Ska Demos".]

The 10" vinyl bootleg, "L.A. Ghetto Ska Demos" which can be had from a variety of online sources in the U.S. (Jump Up Records) and U.K. (Juno Records), includes nascent versions of "Party At Ground Zero" (originally titled "Pink Vapor Stew") and "Lyin' Ass Bitch" which both appeared on the band's "Fishbone EP" released in 1985, as well as cult classic "Skankin' To The Beat".  Of particular interest to fans will be two rare tracks-- "Glow In The Dark" and "What Have I Done" -- that I had never heard before, and to my knowledge have never been officially released. The other track on the demo, "Alcoholic" is quite different from the version that later appeared on "Chim Chim's Badass Revenge" released in 1996. 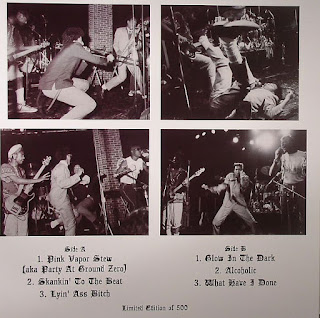 Side A
1.Pink Vapor Stew (aka Party At Ground Zero)
2.Skankin' To The Beat
3.Lyin' Ass Bitch

Side B
1.Glow In The Dark
2.Alcoholic
3.What Have I Done

Stream snippets of all the tracks below.

Unless they are different versions, all of these songs are available on the 1996 2-disc comp Fishbone 101. The first disc is a "greatest hits" of sorts and the second disc is 18 tracks of unreleased/limited release demos and rarities. Looks like the CD is OOP, but it shows up fairly often in used bins, and the mp3s are available on Amazon.

Instead of 'eagle eyes readers' you should have used the term 'obsessed fishbone fans'....me being one of them :-)

Haha! Duly noted and updated. Thanks for pointing this out.

Marco... This is funny as I was the compilation producer of Fishbone 101 while I was an a&r director at Columbia Records in the 90's... these original demo tracks were on a reel that were recorded by David Kahne (my friend and former boss), that led to the band getting signed. I purposely put the tracks on disc 2 (entitled "Extra Credit" without breaks, because the band recorded these songs direct to tape and if you turned up the volume in between the songs you can hear the banter going on between the band and David Kahne. It's interesting to see someone is putting out basically what I made available for fans (as compiled by a fan). Lastly, if these are the same recordings, they missed the whole special part of what goes on in between tracks by changing the original track order.