The Story Behind Paul Simonon & His Famous Smashed Bass Guitar 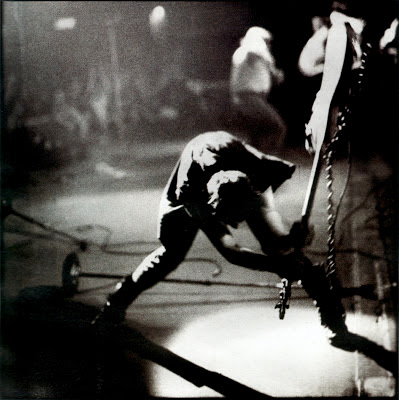 It's September 21st, 1979, at a Clash show at New York's Palladium, and Paul Simonon's bass has only seconds to live. "The show had gone quite well," says Simonon, "but for me inside, it just wasn't working well, so I suppose I took it out on the bass. If I was smart, I would have got the spare bass and used that one, because it wasn't as good as the one I smashed up."

Paul Simonon of The Clash is the reason I initially stuck with the bass guitar despite initially knowing nothing about notes, scales or bass lines. As I fell more deeply in love with ska, reggae and punk music as a young and angry teenager, it was the knowledge that Simonon was a reggae fan, a rude boy and self taught musician that continued to inspire me. That and the iconic image of him smashing his beloved Fender Precision bass guitar sealed the deal.  I wanted to be like him and I had to have the same guitar!

And so because of Simonon, I went out and bought my first cheap bass guitar at a nearby Sears with money I had saved from a dish washing job. It was Cherry red and white and weighed a ton. I remember taking it out of the flimsy cardboard case it came in and looking at it with a mix of desire and despair. I finally had the object of my affection but I had absolutely no idea what to do with it! I remember standing in front of a mirror with the guitar strapped low across my body like Simonon and plucking the strings. The sound was sharp and metallic and nothing like the fluid bass lines I heard on the 2-Tone, Clash and reggae records I played non-stop in my bedroom. My love affair with the bass flickered and threatened to go out permanently. But, I have Simonon to thank for not giving up and for eventually getting a black and white Fender Precision bass.


"Paul Simonon–well, he’d have to be the driveshaft, because it was his aesthetic sense, his knowledge of painting, his use of sculpture (especially the slabs of Carreran marble that characterized his bass playing) and pliocene sensuality–that visualized the band’s look and touch.”

Though known for his many inventive and innovative bass lines with The Clash, Simonon was self taught and did not read music but he brought so many intangibles to the band and to his bass playing. This was always an added inspiration to me, as I struggled to play. It took a while for Simonon to learn the four-string (at one point, he marked the notes off on his instrument's neck to know where to place his fingers), and after 9 months of intense practice he was ready to play on the band's first record. Although it was Strummer and Jones who penned the lion's share of the Clash's songs, Simonon's fluid, almost reggae-ish bass lines often provided the glue that held the band's best known breakneck compositions together.

Fender recently conducted an interview with The Only Band That Matters' bassist. In the interview Simonon talks about learning to play bass, his technique, how he got turned on to the Precision Bass, and the iconic "London Calling" album cover and what led to that historic moment when he "sort of smashed up" his beloved Precision Bass.

According to Fender Bass Player:


"Simonon started out playing a Rickenbacker but found it's sound too thin. He then quickly switched to a mid 70's Fender Precision Bass, which offered more bottom end and a stronger tone. He preferred using heavier model Precisions that he believed sounded better and could take all the abuse he dished out on them night after night. His P-Basses were usually white and he often adorned them with stickers, abstract paint jobs and roughed them up a bit to give them some individuality. He also reasoned that no one would want to steal his basses if they were bashed up and hand painted."

"He frequently swung the instrument around onstage, and after a two hour show would often have serious problems with his shoulder. Strung low by his knees, he normally played with a pick, sometimes using his fingers for reggae style tunes. His style evolved from simple root-fifth punk lines to a more complex and intricate style, incorporating rock, reggae, ska, pop, funk and other elements that set him apart from most other punk bassists of the day."

The Fender Precision bass immortalized on the cover of The Clash's "London Calling" album was a white early 70's model with a maple neck. Simonon had placed a skull and crossbones sticker on the body, done some drip painting on the pick guard and had handwritten the word "PRESSURE" on the top body horn. Although the body and neck of the bass were damaged beyond repair, the smashed remnants were deemed important enough to be displayed in the permanent collection of the Rock and Roll Hall of Fame and Museum. 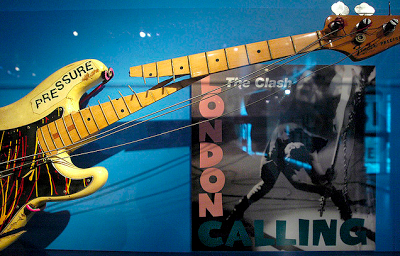 While there is no film or video of Simonon in the act of smashing his bass during the show at the Palladium here in New York City on September 21, 1979, an intrepid fan of the band has matched short film clips of the band performing "I'm So Bored With the U.S.A.", "I Fought the Law", "Jail Guitar Doors", and "English Civil War" with audio from the show that night. They demonstrate the power and energy of the band at the height of their powers and the important role that Simonon played in their live show.

I wonder if Paul would be interested in meeting a chic 13 years younger than he????? I was in primary school when he did this guitar stunt, but I already owned all the Clash albums!!!!

The September 21st date makes for a great legend. After all it was the night of the WNEW-FM simulcast of the concert and, based on the London Calling album credits, the night of the Paul Simonon bass guitar
smash at the end of White Riot - captured in an iconic photo taken by Pennie Smith. Only problem is that he smashed his guitar the night before - I witnessed it on the 20th, also at The Palladium, with my own eyes.

The guitar he smashed had the word PRESSURE stenciled on it (photos of the smashed bass are easily found online) and "Mydeathlok" YouTube videos shot 9/21 taken from an ABC "20/20" documentary on new wave/punk rock, CLEARLY shows Paul playing a bass WITHOUT the word "pressure" (because he smashed that one the night before). (It's harder to make out on a 2nd "drug stabbing time" video included here but I don't see the word pressure on Paul's guitar in that video either).

Joe's shirt determines the date of the photo. On the 21st Joe is wearing a solid BLUE shirt as the video above proves. EVERY PHOTO FOUND ONLINE (I.e. Getty Images) TAKEN ON SEPTEMBER 20th shows Joe wearing a pink/purple shirt with abstract white lines AND IMPORTANTLY, a BLACK BREAST POCKET. This same black pocket shirt is visible in Pennie Smith's own photographic contact sheet of the before and after moments surrounding the SMASH, which was included in the booklet that came with the 25th anniversary "legacy edition" reissue of London Calling.

Also, besides the photos and video that prove the date was September 20th, there is AUDIO (found on the guitars 101 bootlegs website) from 9/20 where you can actually hear the thumps of the guitar smash. And if you listen to the entire 9/20 show it is evident that that show was not nearly as good as the 9/21 "WNEW" show, and it was Paul's frustration with the performance and poor audience reaction, that caused him to smash his guitar. Finally, the WNEW DJ's (richard neer and Pam merly) make NO MENTION of seeing the smash in their post concert commentary on the 21st.

Maybe one day the album credits will be corrected.

I've been playing bass for 43 years, jazz and classically trained. In 1981 I played in a "modern" band and we played London Calling. I loved the power and simplicity of such a prominent bass line.

I've owned albums all my life but the London Calling cover with Joe in mid-swing with his P-bass (I still have my 76) is by far my favorite album cover.