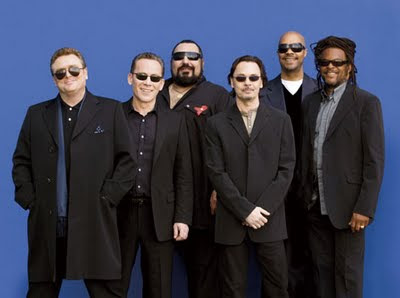 More bad news in the soap opera that has become British reggae band UB40.  News stories from across the U.K. are reporting that a judge in the U.K. has given tax officials permission to issue bankruptcy proceedings against five of the founding members of the band --  Brian Travers, Robin Campbell, James Brown, Norman Hassan and Terence Wilson (also known as Astro).  The band are reportedly set to appear in court to block attempts to declare bankruptcy against them.  The band has sold more than 70 million records worldwide and had more than 50 hit singles. The band split with original singer Ali Campbell in 2008 over what he called management issues related to finances.

Despite the band’s success, its record label DEP International ran into financial difficulties and shut down four years ago. An investigation was launched into the defunct label’s tax debt problems, and the five founding members are now facing claims relating to royalty payments on its back catalog, in a list that dates back more than 30 years.

According to an interview with The Birmingham Post, the band's saxophonist Brian Travers dismissed allegations that he and other members of the Birmingham band are personally facing bankruptcy. “It was only a statutory demand that we are defending, just business,” said the 52-year-old, who said he did not wish to comment further on the matter.

In an interview with The Birmingham Mail, former front man Ali Campbell stated the band blew cash on a lavish lifestyle and no longer receive royalties for their music. Campbell is quoted in the interview that he tried to warn his fellow band members that bankruptcy was on the cards before his acrimonious split with the group in 2008. “This is the very reason why I left the band,” he said. “This was my biggest fear when I was with them, that bankruptcy was going to happen and no one can say I didn’t warn them.”

Oy. Where did it all go?

And all of the sudden Ali seems considerably less like a complete asshole.

I love reggae/rocksteady/dub and ska...but I must admit I've always hated this band and every dreadful record they've released!!!
I was always amazed they made as much money as they did....