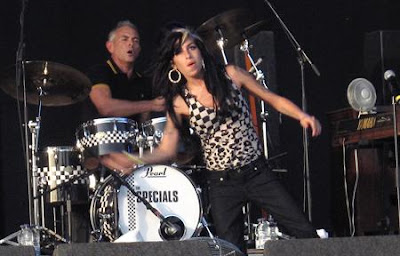 While Amy Winehouse will be best remembered for the two brilliant neo-soul albums she released -- 'Frank' and 'Back To Black' -- her love of ska and reggae ran deep as evidenced by the number of ska covers she recorded and her love for The Specials, who she famously guested with live a few years back. That love of Caribbean sounds (which featured on a number of ska b-sides pulled together for 'The Ska EP') apparently inspired Winehouse to record an album's worth of unreleased reggae tracks.

As far back as 2008, the The Mirror in the U.K. was reporting on Winehouse's trip to St. Lucia and Jamaica where she stayed at Bob Marley's estate and was reportedly working with his son Damein Marley on a set of dark, heavily reggae-flavored songs that were inspired by her failed marriage. Now The Telegraph in the U.K. is reporting Winehouse's unfinished final reggae record is likely to receive a posthumous release. According to the story:


Winehouse had spent the past two years working sporadically on a third album. Sources said that the songs were at demo stage but there was "a lot of material" available. Winehouse's parents, Mitch and Janis, will have the final say on its release and it is expected to outsell Back To Black's five million copies.

Industry experts described Winehouse as a true talent and said there would be huge demand for a posthumous album.

Winehouse was apparently shuttling between recording songs in line with her trademark soul sound with Back to Black producer Mark Ronson and more reggae-tinged material while she was in St. Lucia, (though her label, Island Records were reported to have rejected the reggae demos that Winehouse submitted).   Reports have varied significantly as to what stage the reggae album is in, and whether there is enough material for a full-length new album to be released posthumously. Winehouse protege Dionne Bromfield also claimed to have heard the final album.

No one from the label has confirmed the album’s completion or posted a release date, and there’s yet to be any music from it that’s seen the light of day, so it remains to be seen if the reggae songs will eventually be released as part of an actual album or as part of a larger greatest hits or other retrospective.
Posted by Marco On The Bass at 9:55 PM

I heard a very raggae-y album of her the other day but sadly forgot to ask the barkeeper about the title (okay, I was in a country where I could not speak the native's language) - and I am searching to buy it! Does anyone have a name of the album? It does not seem to be the hidden treasures album...