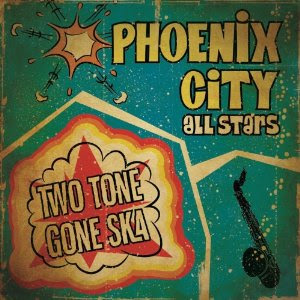 I think I may have heard the best ska album of the year. Yes, The Phoenix City All-Stars take on 2-Tone classics "Two Tone Gone Ska" now out on Phoenix City/Cherry Red Records in the UK may have already earned the top prize for the best ska releases in 2012 in my book!

This inspired and unbeatable collection of mostly instrumental versions of classic 2 Tone tracks that you know and love so well have been taken back to the future from whence they came -- namely 1960's Jamaica. Each song sounds like it was recorded in a small, 4-track circa 60's Kingston studio. The inclusion of legendary guest vocalists Dave Barker (the voice of Dave & Ansell Collins) on Elvis Costello's "I Can't Stand Up For Falling Down" and AJ Franklin (The Federals and The Chosen Few) on Smokey Robinson & The Miracles/The Beat's "Tears Of A Clown" lend further credibility to the mix. The delicious irony of this musical sleight of hand is that the reinterpretations sound so authentic you would think they were the originals themselves! While UB40 have been down this road before (their "Father's Of Reggae" album is quite good), this may be better.

Side one includes "One Step Beyond", "Stereotype", "Tears of a Clown" and "The Prince" while side two features "The Selecter", "I Can't Stand Up For Falling Down", "Ghost Town" and "Too Much Too Young dub".

Check out "The Prince" and "Stereotype" below:

Only 250 numbered LP's are being issued and they are only available only from the London International Ska Festival web site. A digital version of the album is available on iTunes, Amazon in the U.S. and many other retailers.

Those of you living in the U.K. will have a chance to see the band live this fall when they play support for Fishbone on November 4 at the 02 Academy in London.