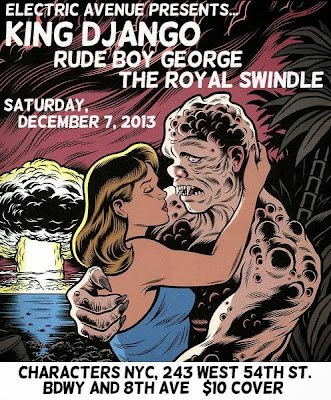 The final Electric Avenue show of 2013 will kick off next Saturday, December 7, 2013 at Characters NYC in the heart of midtown Manhattan with a headlining set by the one and only ska legend King Django, the 80's new wave meets ska, reggae and rocksteady of Rude Boy George and the 60's R&B ska of The Royal Swindle.  Selector Steve and The Fat Albert Soundsystem will spin an awesome mix of ska and New Wave! And its only $10 to get in! Doors are at 8 pm and the cover is a super low $10!

Check out videos of each band below including King Django performing "Anywhere I Roam",  Rude Boy George performing a Goth reggae version of "Love My Way" by Squeeze and The Royal Swindle performing "I Don't Need No Doctor."

Electric Avenue is a partnership between myself and my fellow New York City ska blogging pal Steve Shafer (Duff Guide To Ska who also happens to be a member of Rude Boy George). We have teamed up to present monthly ska and reggae shows at Characters NYC, a midtown Manhattan Irish pub (243 West 54th Street, between Broadway and 8th Avenue in Manhattan) with a big back room ideally suited for live music.

Since last fall, we've been undertaking this labor of love--doing it for free (the bands split 100% of the cover, nobody else takes a cut)--to support ska bands and their fans, and have some fun in the process. Electric Avenue shows already have featured some of the best acts on the Northeastern U.S. ska scene, including Chris Murray (Los Angeles), The Ladrones (Brooklyn/New Jersey), King Django (NJ), The Snails (Philadelphia), The Frightnrs (Brooklyn), Destroy Babylon (Massachusetts), Bigger Thomas (NY/NJ), Beat Brigade (NY), Doomsday! (NY), Los Skarronerros (Brooklyn), The Pandemics (Long Island), The Scofflaws (Long Island), The Bullbuckers (Wilmington, DE), The Reggay Lords (Brooklyn), The Copacetics (Providence, RI) and The Rudie Crew (NY) and The Royal Swindle (New Haven, CT). This summer we were blessed to have Roddy Radiation and Lynval Golding of The Specials perform a solo show for us.

The Facebook Electric Avenue event page can be found here. And take a moment to "like" the Electric Avenue FB page, so you keep up on our shows.
Posted by Marco On The Bass at 9:50 AM