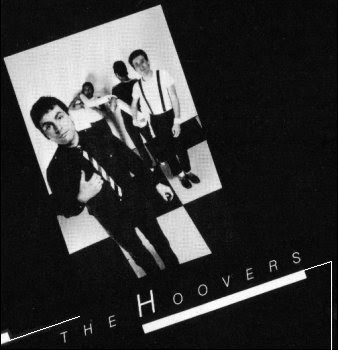 Here is a great piece of 80's American ska history!  Believe it or not, but at one time 2-Tone Records is said to have considered signing a U.S. band to their label and that band was based in California...who was it? Answer: The only American band that Jerry Dammers thought worthy of the 2-Tone label was The Hoovers. Who?

The Hoovers were led by two Brits, Paul Whiting on keyboards and William Sell on guitar who relocated to San Francisco from London in the late 70's and carried their London accents with them, making them the only American ska band from the 80's that sounded like their British 2-Tone contemporaries. Though the 4-piece had no horn section, they sounded very much like a manic American version of Madness. They recorded an LP in 1980 titled "Skin and Blisters" which includes a ska version of Sonny & Cher's "I Got You Babe" long before UB40 decided to do a pop-reggae version with Chrissy Hynde. The band are still active and perform around the northern California area.

I profiled the band over 2 years ago including an interview with Whiting, but recently my fellow ska blogger Tone and Wave recently posted a very rare live radio broadcast of The Hoovers from San Francisco radio station KSAN-FM that was recorded sometime during 1980.  I spoke with Whiting who confirmed some details about the recording: The radio station was KSAN.  It was a show called 'Rising Stars.' It took place at 'The Stone' in San Francisco which was, at  the time a pretty nice club on Broadway. They recorded in a remote truck outside the club and I think it went directly to a two track reel to reel and to radio as it happened. It is amazing to think (especially these days) that a commercial radio station would give time to new unsigned artists. Can't remember much else about the show except I think we opened and there were two other acts. KSAN turned into a country station soon after.  Two songs did in fact become part of the first album, 'Pretty Little Blossom Song" and 'Captain Scarlet"

The songs on the recording are all from the band's album 'Skin and Blisters' and include:

The download link is below.  Enjoy a piece of rare American ska history!

Ah, I'm glad to see this is getting an airing. This is sourced from a cassette that I've had for years...I digitized it a few months back and passed it on to T&W. KSAN was a GREAT radio station, and when they "went country" San Francisco lost a great public resource. I'm glad to see that you could confirm the year and the venue. There were several "Rising Stars" shows that were broadcast, but the other bands were "new wave."

I just checked my cassette...the Hoovers DID open the show, followed by Cha Cha Billy, and then the Lloyds (also known as Lulu & the Lloyds). The Lloyds placed a song on the soundtrack of a Robbie Benson movie "Die Laughing" and I think they did a local single, but never got a major label contract.

Hi, I've been searching for some music by the Lloyds forever. Do you happen to have the cut from the Die Laughing soundtrack?