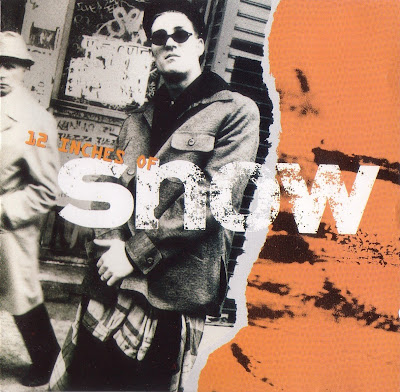 It is hard to believe that it was 18 years ago this month, that Darrin O'Brien, also know as the Canadian reggae artist Snow, released his debut album '12 Inches Of Snow. Fueled by the single 'Informer' which held the top spot on the U.S. Billboard Singles Chart for an unbelievable seven weeks in 1993, Snow went on to earn a Guinness Book Of World Records designation for having earned both the biggest selling reggae single and highest charting reggae single in history. 'Informer' went on to sell 8 million units worldwide and 3.2 million units in the U.S.  Those two facts alone still boggle the mind.

While the merits of O'Brien's songs and chatting skills have been debated and he is often denigrated as a 'one hit wonder', his story is worth reflecting on because in the long run, it can be argued that he helped to further popularize reggae and dancehall reggae in particular, opening many Americans ears to the sound for the first time.  As the product of multi-cultural Toronto, O'Brien was raised in the Allenbury Gardens housing project which included a large number of Jamaican immigrants.  It was here at age 15 that O'Brien learned to love Dancehall reggae and learned to chat and toast from Jamaican friends.  It's also where he ran into trouble with the law and those experiences informed much of '12 Inches Of Snow' and the song 'Informer' in particular.

Say what you will about O'Brien and his music, but I think the man deserves more credit and respect then he receives. Often accused of cultural misappropriation because he used Jamaican patois and reggae to chat his songs, O'Brien actually embraced his Irish heritage and his Canadian identity more then many people may realize.  According to Canadian social scientist Rebecca Haines who has written about music and ethnicity, O'Brien actually makes it clear who he is and who he isn't when he declares 'Heritage Irish/No not Jamaican' to clear up any confusion among his listeners about how he has mastered Jamaican reggae music, style and language. In fact in choosing his moniker, Haines argues that O'Brien clarified for listeners that though he grew up in a predominantly black neighborhood, he is both white and Canadian singing in 'Informer':

But inna a de dance they say where you come from
People dem say you come from Jamaica
But me born and raised Canadian, So me want y'all fe know
Pure black people dem is all a man know

Nevertheless, Snow's musical legacy remains mixed.  Though he later gained immense credibility in Jamaica and with Jamaican dancehall artists recording the hit 'Anything For You' with Beenie Man and Buju Banton, he is still trapped by the immense popularity of 'Informer' and remains misunderstood by many.  Indeed, fellow Canadian Jim Carey's video 'Imposter' from the TV show 'In Living Color' may unfortunately be what most people remember about Snow.

There is some squirm-inducing cultural appropriation here but the song stands up and Snow was no Pat Boone.

I agree Jeffen. It would have been interesting if Snow had tried singing in his voice instead of mimicking Jamaican patois. Despite his one-hit wonder status he's carved out a decent career outside the US market and he's seen as a credible artist in Jamaica.

Hi Marc, great to hear the story of Snow from an American perspective. I didn't know that his single and album were SUCH great successes. And I hadn't seen the Jim Carey video. Hilarious! When the song came out in Germany I was a writer for a music magazine. And I remember how the A&R people were praising it as one of the world wonders that a guy was chatting in patois, and that he was WHITE. Well, you could say that's their job, but I didn't (want to) see the point. To me the track was okay, but not much more. When it came to Non Jamaicans with Patois lyrics I was into Apache Indian http://www.youtube.com/watch?v=D_bdl6TS1tg&feature=related.
But ethnicity and authenticity are such difficult and interesting topics, looking forward to find out more. Thanks for writing this post.

Listen I only wondered if the man was still alive? And found out that he is. And very pleased to hear that! I'm not sure how he came up in conversation to be honest but after reading what the man has been up to since! Good on him ! What ever it takes for people or individuals to use what they're good at to fitful there goals or act on things because of the hand that life has dealt them then that person can hold the head high . In this day and age everybody has got something to say about someone else's when you should be looking at what's going on behind our own front doors! Today everyone is hiding behind someone else's drama. We can talk about one hit wonders! So what more or less all business boils around making what you can of it and selling it on. And then you are free to fulfill what you want to do. So well done mate ! And at the end of the day everyone is going to remember that track for one reason or another. Look after yourself mr o Brian! I only wish that catchy number was not about a grass.