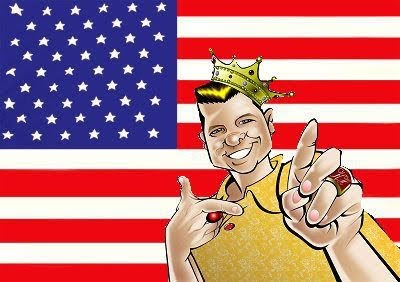 All hail the King!  King Hammond (the alter ego of Nick Welsh) will be gracing New York City with two shows this weekend -- backed by NYC dirty reggae band The Hard Times--on Thursday, December 1, 2011 at The Shrine in Harlem and Saturday, December 3, 2011 at The Lake in Bushwick, Brooklyn.

Welsh remains one of the busiest and most prolific ska musicians on either side of the Atlantic and his resume is a mile long. He has worked with and produced A-list artists like Prince Buster, Laurel Aitken, Dave Barker, Rico Rodrigues, and Judge Dread as well as Lee 'Scratch' Perry with whom he worked on the Grammy Award winning album 'Jamaican ET'. Welsh has also been the bassist and song writer in Bad Manners and The Selecter (helping to shepard both band's post 2-Tone careers - he wrote 'Skaville UK). If that wasn't enough, he also writes music for U.K. and U.S. television shows and video games. Welsh revived King Hammond in 2010 and since that time has released three albums (“The King and I,” “Jacuzzi,” and “Showbiz”) and a slew of vinyl EPs on his own N.1 Records imprint. In June 2011, King Hammond was a featured performer at the Ink ʼn ʼIron Festival in Long Beach, California.

I had the pleasure to meet Welsh in 1991 when my band Bigger Thomas was the support act for The Selecter's first tour of the U.S. since the band had broken up in the early 80's. Welsh, Pauline Black and Neol Davies were all very kind to us (it was our first proper tour) and they always made sure we got a sound check and a dressing room (which is more unusual than you might expect in the cut throat music biz). As a fellow bass player I was also always impressed that Welsh played a Steinberger bass (which is a very sleek guitar that has no tuning pegs.)