Could Hollie Cook Be The New Face of Reggae? 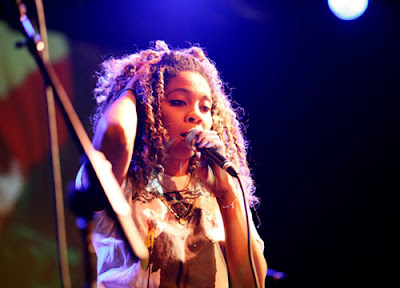 I finally had a chance to catch live video of Hollie Cook (daughter of Sex Pistol drummer Paul Cook) performing on U.K. music TV show 'Later With Jools Holland' which was broadcast last week. After playing her eponymous album over and over this summer, I can say without hesitation she could be the new face of reggae! Her album, produced by none other than Price Fatty, has been the soundtrack to my summer and is without a doubt the finest UK reggae set of this year - if you haven't already, get it here.

Her self-coined 'Tropical pop' sound is a bit of a misnomer since her songs and style are really an homage to British Lover's Rock reggae singers Janet Kay and Phyllis Dillon crossed with the sound of classic 60s girl soul and pop groups.

For those of you living outside the U.K. or who were not lucky enough to catch the program, here is Cook and her co-vocalist Horseman (and their excellent backing band) performing 'Body Beat' and 'Milk and Honey'.  Enjoy some of the sweetest sounding reggae recorded and performed this year.

No question about it, she is! Check out The Duff Guide to Ska review of her album: http://duffguidetoska.blogspot.com/2011/07/duff-review-hollie-cook-hollie-cook.html

I have to agree 100%. One of my favorite albums this year (and finally a new British vocalist not being forced on us as the next Amy Winehouse).

is it just me or this has a very nice "In the Studio"-era Specials influence? Brilliant.-

Yes - it's a wonderful record.