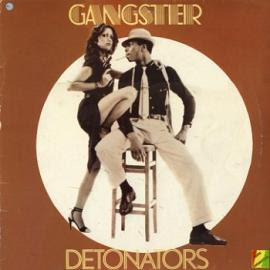 The latest re-issue from Sean Flowerdew's fledgling U.K. reggae revival label Phoenix City Records is the long lost 'Gangster' album by The Detonators. The album was the brainchild of dub lover (and lover's rock producer) John Collins, who recorded the tracks in 1979 on a DIY studio he built in his front room in the North London neighborhood of Tottenham. Though released in the late 70's, the album has long been out-of-print until now.

Collin's work is a straight up serving of lovers rock with a dash of dub for good measure, and despite Collins’ DIY ethic, the magic he produced with his own handmade synths, drum machine and stdio effects on his 4 track studio studio put him on par with the UK’s finest reggae producers. Luckily, the reissue also includes a copy of the very rare 'Lift Off', a dub track which aside from being something of an ambient reggae experiment, also acted as the blueprint for The Specials’ 'Ghost Town' track.

According to Flowerdew, Collins is the British version of noted Jamaican producer King Tubby. By building his own recording gear and equipment, he developed his own brand of reggae and deserves credit for recording and releasing the very first U.K. dub track 'Lift Off'.


He’s credited by many as producing the first ever UK dub track, called Lift Off, which was on the flip side to a hit by Victor Romeo Evans called At The Club, bit of a lovers track. The Specials heard that and asked him to produce Ghost Town. But John’s instrumental side was the Detonators and he made this album that came out in ‘79, and he did things like building his own drum machine because none were available at the time. I mean Dennis Bovell was probably doing dub first but this had an electro vibe that was like nothing else.

As the story goes, on hearing 'Lift Off' on the flip of Victor Romero Evans’ 'At The Club', Jerry Dammers talked Collins into producing what would turn out to be The Specials final single. You can read more about the recording of 'Gangsters' over at Collins’ own Local Records website and while you’re at it, hit play below on 'Lift Off' which inspired Ghost Town’s iconic eerie intro, created by Collins in post production with a hand built Transcendent 2000 synth.

I had the pleasure to interview Collins about the recording of the album as well as the studio techniques he used to create his cutting edge dub sounds.

Where and how was 'Gangster' recorded?
"Lift Off" was recorded in 1980 at my house in Tottenham on the 4 track Teac like the other tracks on Gangster. I started by playing and recording the bass (DIed) along with the (home made) drum machine and then overdubbed guitar, organ and tambourine.

How did you get the great dub effects on the album?
I got the effect at the start by using a home made ring modulator and a signal generator along with the transcendent 2000 synth for the wind effect running live during mixdown onto the Teac 2 track. I used a Sony TC377 for stereo tape echo with my home made phaser in the feedback loop and a Hammond spring for reverb. The 2 track was put into record and the effects faded in, turning the dial on the signal generator gradually to get the "lift off" effect. When it felt right, I started the 4 track, faded in the rhythm, faded out the effects, muting tracks and playing with the echo and reverb - dub style. I then put the 2 track (semi) master 1/4 inch tape on the 4 track machine and recorded my voice doing the countdown on one of the inner tracks. This was pretty much the same technique I used on "Ghost Town" the following year.

Can the song 'Lift Off' be considered one of the first British dub songs?
My first dub was "Working Dub" recorded in 1978 and released in 1979. UK band like Matumbi (Dennis Bovell) and Steel Pulse were around and must have released some sort of dubs before me, but I'm sure my recordings were the first "electro dubs" made using a drum machine.

What was the genesis of Victor Romero's involvement in the project?
Victor was in a dance group when we first met and the tracks were made for their performances.

Do you think the songs on 'Gangsters' have stood up to the test of time?
I certainly enjoyed listening to the old master tapes again, which were fortunately recorded on Scotch tape and in perfect condition - I've still got the Teac 2 track to play them on. The recordings have a period quality - it was a bit like looking at old photos for me!

You can preview and download a copy of 'Gangsters' over at the iTunes UK store and .
Posted by Marco On The Bass at 5:09 PM

Great read....I still play my vinyl copy of this album