The Specials To Soldier On! Roddy Byers Is Still A Member Of The Specials! 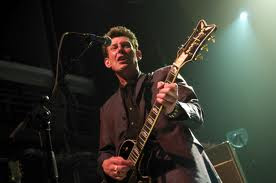 The good news is that The Specials have decided not to call it quits after all following what was to be the very last show of their three year reunion in London on Thursday night. And despite what you may have read in a variety of media outlets (including this blog), guitarist Roddy 'Radiation' Byers, has NOT left the band. The decision to continue on was confirmed by Lynval Golding and the band are now hinting that new material may be on the way.

The news represents a complete about face for the band, who announced the tour would be their very last. In fact, only recently, front man Terry Hall had announced that after this tour they’d call it a day.


“I just don’t want to be in a band any more," he said. "I think that this is the time to say, 'Thanks very much. See you later really.' I have been doing this for over 30 years and just think it is time to go now. I am 52, and I am the youngest in the band. I don’t get much time with my family, and touring tires me out.”

However, after the show on Thursday night, it seems like splitting up is a thing of the past. Vocalist Neville Staple stated:


"Seeing the people dancing right into the back of the venue made us reconsider our decision and we realised that an iconic band like The Specials shouldn’t go and leave their fans in this sad way. We thought we’d rather celebrate the last show of our tour in style.

Despite any confusion about Byers role in the band moving forward and contrary to what his band mates may have been quoted as saying, the iconic guitarist, whose sound and stage attitude add so much to The Specials, is still a member of the band.  His publicist shared a statement with me that makes it clear where Byers stands:


"In response to the November 4th NME article citing Roddy “Radiation” Byers’ alleged decision to leave the Specials, Mr. Byers would like to make it clear that he has not, in fact, left the Specials. Any previous statements quoted in the articles that were made by Mr. Byers regarding leaving the Specials were in reaction to Terry Hall’s public statements in August 2011 about disbanding after this last tour, and have nothing to do with the recent decision by Mr. Hall and other members to continue on. Byers is still planning to be involved in all future Specials’ music and tours, and is looking forward to seeing the Specials’ fans in front of the stage once more."

Byers plans to continue playing live with his band The Skabilly Rebels who have recently released an album. The band's next show is on November 18th in Derby.

So what does this news mean for fans of the band?  First and foremost it would suggest more touring, particularly in the U.S. and Japan which are markets where the band remains incredibly popular.  It also means the band may have finally committed to writing new material as they have now taken the live show of the their two albums as far as they can.  It also begs the question: What role will or won't Jerry Dammers play in the future?  With Byers still in the fold, the band has three legitimate song writers in Hall, Golding and Byers. Stay tuned!
Posted by Marco On The Bass at 11:11 AM

This is an official statement regarding Roddy's possible leaving the Specials at this tour's end:

"In response to the November 4th NME article citing Roddy “Radiation” Byers’ alleged decision to leave the Specials, Mr. Byers would like to make it clear that he has not, in fact, left the Specials. Any previous statements quoted in the articles that were made by Mr. Byers regarding leaving the Specials were in reaction to Terry Hall’s public statements in August 2011 about disbanding after this last tour, and have nothing to do with the recent decision by Mr. Hall and other members to continue on. Byers is still planning to be involved in all future Specials’ music and tours, and is looking forward to seeing the Specials’ fans in front of the stage once more."

I am glad that the lads have decided to carry on - a new album and a tour would be a fitting way to finish.