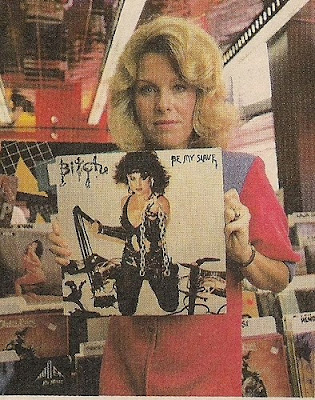 One the chapters of my book is devoted to the Boxboys who deserve credit for being the very first Los Angeles-based ska band and for helping to kick-off the ska mod revival that took L.A. by storm in the early 80s. In fact, the band were ground zero for a number of third wave ska bands like No Doubt, Save Ferris and Reel Big Fish that exploded out of Orange County in the early and mid 90s.

However, there is more to The Boxboy's story than meets the eye. Amazingly, L.A.'s very first homegrown ska band was fronted for a time by Betsy Weiss who later went on to become Betsy Bitch the lead singer of 80's heavy metal band Bitch. Here in the U.S., Weiss and Bitch became forever linked with music censorship efforts by the Parents Music Resource Center (PMRC) lead by Al Gore's wife Tipper. Bitch became a target of the PMRC and Gore. Their albums, held in Gore’s hands, were shown on talk shows and televised congressional hearings. The media coverage did wonders for the band's profile and Gore and the PMRC are thanked in the liner note credits, because the band said the furor gave them some welcome free publicity. But before she became the poster child for censorship efforts against heavy metal and hip hop, Weiss helped to make ska the now sound in LA.

Just how much of an impact did Weiss and The Boxboys make on the L.A. music scene? An article from the July 25, 1980 edition of the Los Angeles Herald-Examiner reviewed the band's O.N. Klub show and mentioned Weiss and her singing voice: The band that night, the Boxboys, whipped the club into shape by means of a petite singer with a huge voice and a keyboardist who just wouldn't stand still. It got to be difficult at times to distinguish the band from the audience. The cocktail-napkin-sized dance floor was jammed with pork-pie-hattted, big box-coated guys and gals. The Boxboys even abandoned their perches to do the mean ska dance themselves.

Below are book interview excerpts from Weiss and the band's keyboardist Scott Sigman about her ska origins and later PMRC attention:

Betsy Weiss: The ska music and ska stage persona was so not me. I’m a rock and roller. My main influence in terms of getting into music as a singer and front person was Alice Cooper. I am all about being flamboyant and playing up my sexuality and image onstage. With all due respect to the Boxboys, they did nothing but encourage me to play-down those aspects. They dressed me up in a suit, tie, porkpie hat, hair in a bun, and taught me how to “skank”. While it was an “interesting” experience, my heart was not in it. I have fond memories of being a Boxboy. The guys were great, it got my feet wet in terms of stage experience and recording, and it was great to finally be a part of a functioning band. But I think I’m a better “bitch” than I was a “Boxboy!”

Scott Sigman: It was sort of funny when Betsy went on to start her heavy metal band Bitch and they end selling a million records when Tipper Gore holds up their record and says, “Look at these explicit lyrics.” I was like, “Why didn't we do that when she was in the band?”

Give Betsy's go as an LA rude girl a spin below on the band's "Separate Rooms" single from 1981!