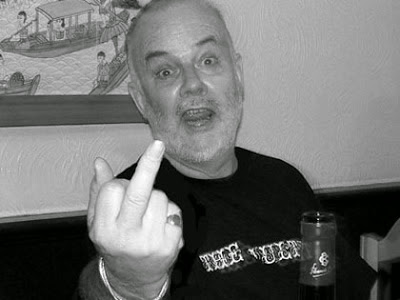 John Peel. His name alone conveys musical gravitas. Peel probably made more of a contribution to British music (and its effect on the rest of the world) in the last 50 years than anyone else. As a DJ on UK's Radio 1, he spoke to succeeding waves of kids and was responsible for breaking new bands such as Radiohead, The Undertones, The Clash, The Smiths, Pulp, T-Rex, New Order and many, many more. And after a lifetime of listening to more music than most of us could ever hope to do, Peel rated The Beat as one of his favorite bands of all time.

He first crossed paths with the band at a University gig in Birmingham where he was booked as a DJ. Supporting him was a local, unknown Birmingham band called The Beat. Peel was so blown away by the band that he swapped his £800 check with the band for their £80 check and invited them to come record a live radio session for his show. He then promoted them on his show regularly and helped to make them big in the UK and Europe. Peel's affection for the band was obvious as he invited them to record three sessions for his show.

Each session is a microcosm of the band during the three distinct phases they went through. The first session from November 1979, features songs from the first LP "I Just Can't Stop It" and is notable for the fact that it does not include Saxa, so "Tears Of A Clown", "Ranking Full Stop" and "Mirror In The Bathroom" sound closer to the way they did when the band first started performing. Ranking Roger's toasting is more prominent and punk edge more apparent. David Steele's bass lines still astound for their creativity.

The second session from September 3, 1980 demonstrates an amazing maturity and complexity in the songwriting from the session less than one year earlier. Both the non-album tracks "Too Nice To Talk To" and "Psychedelic Rockers" are real soundscapes that incorporate every influence the band could fit into one song (pop, reggae, calypso, Afro-beat). Saxa's playing on these two tracks is also some of the best I have heard. I was also struck by how much better the album tracks from the "Whappen" LP sounded, particularly "Monkey Murders".

The final session from March 1982, previewed songs from the "Special Beat Service" LP that was released later that year. The distinction between the pop and reggae numbers is clearer though the version of "Save It For Later" is sublime and "dirty" sounding, and is so much better than the recorded version we are all familar with. The reggae numbers are among the best by the band that I have heard.

As a huge fan of The Beat, its a real treat to listen to these sessions. Each one has something slightly different or unique about it that is distinct from the recorded versions you are used to hearing. First, there is a freshness that comes from the live recorded nature of the songs. Next, you can hear subtleties that you have never noticed before. A new guitar lick here or varied melody from Saxa on an extended solo. It puts their talent and songwriting on another level.
Posted by Marco On The Bass at 7:18 PM 2 comments: