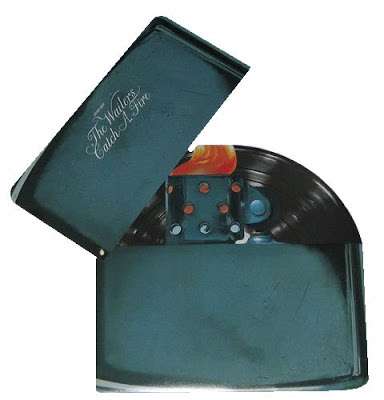 Many fans of reggae cite the Bob Marley & The Wailers instant classic album "Catch A Fire" released forty years ago, as one of the very first albums that turned them into fans of the genre.  While many listeners have assumed that the striking guitar solos featured throughout he album were played by Peter Tosh, the fact is quite a few of them were performed by Alabama-born, southern rocker Wayne Perkins, who was recruited to play on the record by Island Records president Chris Blackwell while mixing it in London.

After recording the album's basic tracks in Jamaica in 1972, Marley took the tapes to London where he worked closely with Blackwell to flesh out the Wailers' bare bones sound into something more palatable for American and European audiences. Have a listen to the original version of the song the band recorded in Jamaica.

Perkins, then a Muscle Shoals studio sideman, was asked to provide lead guitar overdubs on three cuts: "Concrete Jungle," "Stir It Up," and "Baby We’ve Got a Date." His contributions to the pioneering LP weren’t actually mentioned on the original liner notes — indeed most listeners assumed they were hearing Peter Tosh — but Perkins received credit later. The late Timothy White, a Rolling Stone editor and author of a Bob Marley biography, made sure Perkins received his due, calling him "the unsung white Wailer." Have a listen to Perkins sinuous, meticulously phrased improvised lead that smoothly spans three octaves!

According to an interview that Perkins conducted with the Birmingham City Paper in October, 2009, he confirmed that Blackwell was specifically trying to appeal to a rock audience and that he believed that Perkins' distinctive playing honed at Muscle Shoals, particularly on album opener "Concrete Jungle," would help launch Marley and The Wailers out of Jamaica and make them stars.  To that end, Blackwell went as far as to commission graphic artists Rod Dyer and Bob Weiner, to design a rock style album cover depicting a Zippo lighter (see above). The sleeve functioned like a real Zippo lighter case, opening at a side hinge to reveal the record within.

Perkins related the experience of playing the memorable solo:


"We were in the middle of working on a Smith Perkins Smith album in London, and I ran into Blackwell on the spiral staircase at Island Records. He said that he had some reggae music that he wanted me to try to play on. I really wasn't familiar with hardcore reggae. He wanted me to 'do that Southern rock guitar thing, or whatever you do.' So I met Marley, but just briefly. I didn't know any of these guys. And the first thing I noticed when I walked downstairs was that the basement was in a fog. Lots of [marijuana] smoke. It was too funny. I tried to get down to business."

With guitar in hand, waiting to begin recording his part, Perkins requested an explanation of how to approach this music with which he was unfamiliar. "Blackwell explained that the bass drum, sock cymbal, and the snare [drum] are on the one and three [beats]. He told me to ignore the bass guitar because it was more of a lead instrument [as opposed to a bass's typical role as a rhythm instrument]. It's great music, but it's kinda weird in that everything feels like it's being played backwards.

'Concrete Jungle' was the very first thing that I was handed. That was the most out-of-character bass part I'd ever heard. But because the keyboards and the guitars stay locked together doing what they're doing all through the song, that was sorta my saving grace. I thought I could follow the song, but I still didn't know what I was going to do on guitar. So I started doodling on the front of it, and I told the sound engineer to start over about halfway through it. Then I started picking up a little something here and there. I nailed that guitar solo down on the second or third take, I think. It was a gift from God, because I really didn't know what the hell I was doing. And then Marley came into the recording room. He was cartwheeling, man, he couldn't get over what had just happened to his song, he was so excited. I couldn't understand a damn thing he was saying. And he was cramming this huge joint down my throat and wouldn't take 'no' for an answer. He got me real, real high."

Finally, below is an interview with Perkins discussing the iconic solo.

Nice Article. I am a fan of writings aimed at finding who made what in the details of any work of art. I have always sited Perkins as a noteworthy musician. Thanks to the author of this article.

Fantastic to hear Wayne Perkins take on the recording. I would like to know 1. What was a Southerner doing in London back then, besides recording, obviously,2. who really played the bass part, 3. Did Perkins play on other Wailer's songs?

Such a terrific recording - American backing vocals and American guitar with Jamaican rhythms. Mysterious, complex, sparse, remarkable recording! Heard this when I was a kid and was intrigued by the title. Haven't hesrd it since then until now. Am amazed at the complexity of the musicianship - sparse and interwined. Outstanding! Kudos to Chris Blackwell for choosing Wayne Perkins and for signing the Wailers!!!

Fantastic to hear Wayne Perkins take on the recording. I would like to know 1. What was a Southerner doing in London back then, besides recording, obviously. It was very brave for a Southerner to leave the South and travel overseas back then, 2. who really played the bass part, 3. Did Perkins play on other Wailer's songs?, 4. What other recordings did Wayne Perkins play on, and, 5. Who were his musical influences? Scotty Moore? Hank Garland? Chet Atkins? Etc.

Such a terrific recording - American sounding backing vocals and American guitar with Jamaican rhythms. Mysterious, complex, sparse, remarkable recording! Heard this when I was a kid and was intrigued by the title. Haven't heard it since then until now. Am amazed at the complexity of the musicianship - sparse and interwined. Outstanding! Kudos to Chris Blackwell for choosing Wayne Perkins and for signing the Wailers!!!

Familyman played the bass, the true wizard. Peter Tosh and Bunny Wailer on the background vocals. That's why I love the original Wailers because of the vocal interchange between Peter, Bunny and Bob. The Jamaican version is actually quite good. I like the acoustic sounding guitar.

Just want to say that that solo takes me somewhere special, an amazing solo on an amazing song, thanks Wayne and RIP Bob.