A Conversation with Josh Harris of The Untouchables 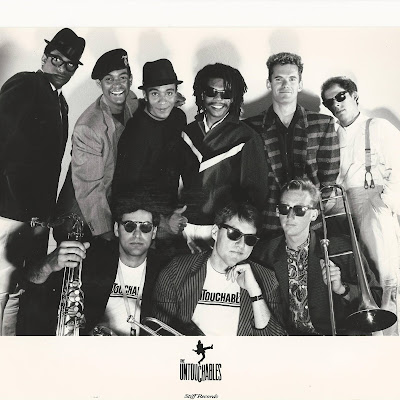 It's hard to believe that The Untouchables 'Wild Child' album was released 32 years ago during the spring of 1985. It remains one of the earliest and most popular examples of purely American-styled ska mixing in soul, pop and funk. The success of the band and their giant step from local Los Angeles ska/mod heroes to a major label deal with Stiff Records in the U.K. is a classic story about how old fashioned DIY marketing, self-promotion and good luck used to work in the music business (now all you need is a YouTube video!).

Josh "Acetone" Harris joined the band in 1983 right before they signed to Stiff Records (he was also a member of the first American reggae band -- Huey & The Titans who later became The Shakers and were signed by David Geffen to Elektra/Asylum records in 1975 and went on to record an album called "Yankee Reggae.").  He was originally hired to engineer sessions for the band's two indie singles "The General" and"Tropical Bird." The session producer suggested to the band that Harris add an organ part. Since the band lacked a keyboard player, they approved. The only organ available was an old Acetone, which is much smaller than a Farfisa (hence Harris' nickname). Later, Harris was brought in as a replacement for one of the original members as the band evolved from the original line-up that got its start at the O.N Club into the group that recorded 'Wild Child'.

I interviewed Harris about what it was like to join the band right before the fast moving chain of events in the mid 80's  that lead to the band getting signed to Stiff Records and the 'UT Mania' in the U.K. and Europe that followed (which ironically happened just as 2-Tone had finally been declared dead and buried ). His memories and stories are priceless in their detail and provide anyone who has ever wondered what its like to be signed to a label, record an album and hit the road to tour.

Harris has found a different kind of success since his days with the band. He and his wife founded Rustic Bakery in 2005 to tap into the growing interest in artisanal cheese with a line of handmade toasted flatbreads. Since then the business has grown to include four cafe/bakeries in the Marin County area of California and a wholesale division that has products in supermarkets across the U.S. and customers around the world. The reputation of the bakery has reached the point that baked goods from Rustic Bakery were served to Pope Francis during his visit to the U.S. last year. Despite a busy work schedule, Harris has also found time to record a release an album of songs and will be playing a CD release party at the Art House Gallery & Cultural Center in Berkeley CA on February 18, 2017.

Harris was a member of Huey & The Titans in 1973.  Give a listen to his early attempts at playing reggae organ and keys.

Here is the scene of the band performing "The General" in Party Animal which also included songs by The Fleshtones and The Buzzcocks.

Here is the band's self-funded video for "Free Yourself" which eventually won honors as Billboard Magazine's 1985 "Best Indy Video Of The Year."

Once the band was signed to Stiff Records in the U.K., they went to Europe where they recorded the "Wild Child" album and toured.  Below is rare video of the band performing live on British television in 1985.

Below is the promo video for "I Spy For The F.B.I" which was produced by Jerry Dammers of The Specials.

Stiff Records released short videos of the stories for songs released on the label.  They interviewed lead singer Jerry Miller about his memories of being signed by Stiff and working with Dammers.