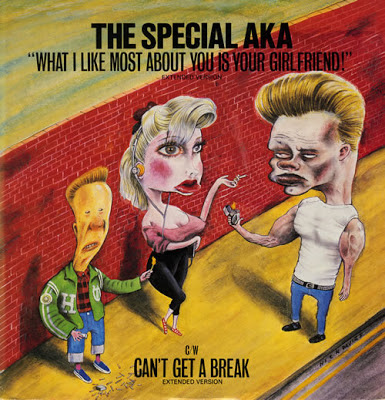 After Terry Hall, Neville Staple and Lynval Golding left The Specials it should have been game over for the band, but Jerry Dammers decided to soldier on as The Special AKA to make the "In The Studio" album, which according to many involved was a very difficult record to make. With Dammers perfectionism in overdrive and band members coming and going, its amazing that the record sounds as intact as it does.  Despite the difficult circumstances surrounding its birth, the album features the life-affirming joy that is "Free Nelson Mandela".

Perhaps one of the most unusual and intriguing tracks on the album is "What I Like Most About You Is Your Girlfriend". Technically this was The Special AKA’s last single and the swan song for 2-Tone Records when it was released in September 1984.  I remember purchasing the single with fantastic art work by Nick Davies (read my interview with him here) at Bleeker Bob's here in New York City.

Upon opening the shrink wrap, I was surprised to find a large poster of Jerry Dammer's inside the record sleeve.  He was dressed up like some 1930's approximation of a space man (the poster quickly went up on my college dorm room wall).  It was only many years later, after seeing the extraordinary video for the single (with Jerry as an alien turning up in a bar, talking to a sailor while eyeing his girl, as The Jazz Defektors spiral and pirouette on the club's dance floor) that I put the connection together. It remains a classic.

With rare falsetto lead vocals by Dammers (sounding eerily like Rhoda Dakar who took the lead on other songs from the album), the song was a minor hit in the UK with it’s tongue in cheek lyrics ("Your girlfriend is what I like most about you"). It’s been stated by several fans of The Specials that the video for the song may be one of the best the band ever made (alongside the video for Ghost Town). The song with its unique jazz and reggae sound is a belter, showing Dammers' sense of humor was still intact, and it features some amazing horn playing by Rico Rodrigues and Dick Cuthell.

I connected with Rhoda Dakar, who was a member of The Special AKA at the time to find out more about the song and why it is the one and only song to feature Dammers on lead vocals rather than lead singer Stan Campbell or Dakar herself.


"He used to spend days doing guide vocals, as we were allowed no interpretation of our own. As the backing tracks were already recorded, there was no possibility of changing anything to appropriate keys for our voices. Jerry could not be made to understand the human voice is not a tuneable instrument. He wrote it about his girlfriend, so I imagine couldn't bear anyone to add anything of their own to the vocal. I can only imagine Stan (Campbell) didn't follow instructions to the letter."

Despite the turmoil and dysfunction that accompanied the recording of the album, the song quickly became of a favorite of fans and musicians alike. Have a listen to wildly disparate versions by Elvis Costello and The Punk Monks.

One of my fave SPECIAL AKA songs - yes even better than Free NM.

Great piece. Of all the tracks from that album, I think this is the track that would've really suited Terry Hall's vocals!

Great piece. Of all the tracks from that album, I think this is the track that would've really suited Terry Hall's vocals