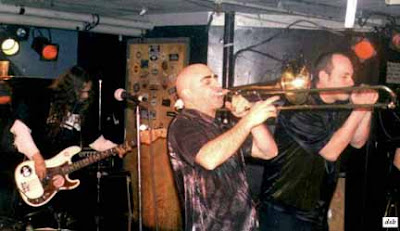 In a year of ska band reunions, the news that Bim Skala Bim will be reuniting to open a show for The Mighty Mighty Bosstones during their annual Home Town Throw Down 12 on December 28th at The House Of Blues in Boston, may in fact be the best ska related news I've heard all year. The band last played together on New Year's Day 2000. Since then they have been silent, though members are still active in other musical projects. The news has created quite a stir on ska message boards around the Northeast of the U.S., particualrly on The Bosstones fan board where the news has been greeted with disbelief. 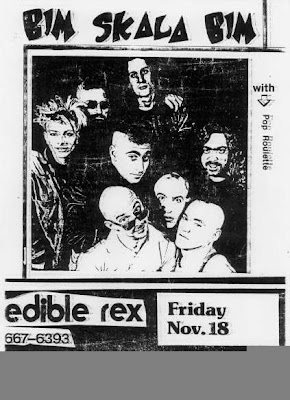 In my opinion Bim Skala Bim is among the best American ska band's ever (along with The Untouchables). They toured relentlessly throughout the 80's and 90's and I always loved their unique mix of 2-Tone ska, Calypso, Rock and Pop with thoughtful and catchy lyrics and top-notch musicianship. Their sound is unmistakable and early songs like 'The Key', 'Jah Laundromat' and 'Solitary Confinement' from their first self titled album (which I wore out from playing over and over again on my turntable) still get me bouncing. My band played a number of shows with them in our early days at City Gardens in Trenton, NJ. They were always kind to their openers and they shared touring tips and advice with us. For my money, Vinnie Nobile is one of best trombone player's I've ever heard and his distinctive sound defines the band (in the way Saxa's solos define the sound of The Beat).

The Bosstones will be playing three shows in succession at the end of December. The line-up of support bands includes:

December 26: Pilfers and Razors In The Night
December 27: Darkbuster and The Void Union
December 28: Bim Skala Bim and The Pietasters

Below is video of the band performing 'Diggin A Hole' and 'I Took A Fall' featuring Nobile's trademark trombone solos:

I have a call into Nobile (whose current band The Pilfers will also open on the first night) to get more information about who else from the band will be joining him on stage for the reunion. Once I connect with him I plan to post the information along with an interview with him about the band and the reunion.

I have funny feeling tickets for all three shows may be close to sold out, but if you are feeling lucky you can visit The Bosstones Web site to try your luck.
Posted by Marco On The Bass at 3:08 PM