Jerry Dammers Diary Documents The Early Days of The Specials 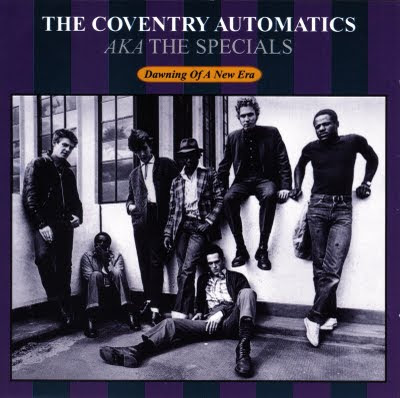 As The Specials undertake the second leg of their UK tour (still without Mr. Jerry Dammers), I thought it was appropriate to share some pages from his diary documenting the early days of the band when they were known as The Coventry Automatics. I discovered this priceless document posted on The Specials fan forum recently and wanted to make sure it got shared with a wider audience of 2-Tone fans.
The actual layout of the diary is impressive, given that Dammers created it long before the first generation of Apple Computers made the old school way of doing art design obsolete.  The 3-page diary includes spaces for months between 1976 and early 1979 and hand written entries that chronicle what now has become the well-known lore of the band's early days.  Its all topped by a roughly designed heading featuring The Special A.K.A. moniker that Dammers has always used.
Dammers entries highlight some great stories, including an early attempt to lure Johnny Rotten from The Sex Pistols to replace Terry as the lead singer of the band. Most of the monthly entries for 1978 provide a real window in to the trials and tribulations the band endured as they looked for a manager and a record deal.  It;s fascinating to read Dammers take on their experience traveling to Paris which resulted in the song 'Gangsters' as well as his pointed jibes at Clash manager Bernie Rhoades who managed the band for a short time.  All in all its a great historical artifact that documents the band and Dammers drive and ambition. 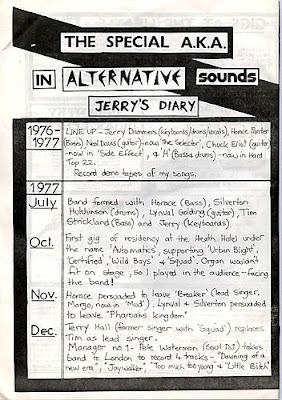 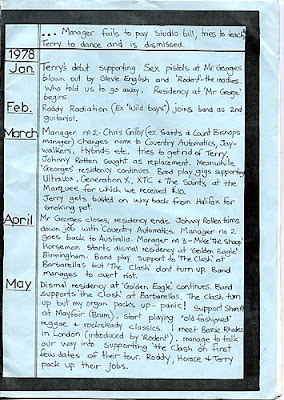 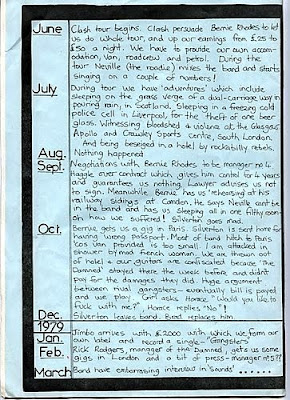 Thanks for posting this very intriguing diary. Of particular interest to me were Jarry's comments in May 78 about how they started playing "Old Fashioned reggae and rock steady classics" and then in JUly of 78 they were "Besieged in a motel by a group of Rockabilly Rebels" (Roddy went on to form the Skabilly Rebels).
Interestingly he mentions the name change between "Automatics" to "Coventry Automatics" but never mentions the name change to "The Special AKA"? What name did they tour with the Clash under?

Hi Matt C. Agreed. It is a fascinating document of Jerry's take on the early days. I believe the band were know as The Special A.K.A until they signed with Chrysalis when they became The Specials.

Weird that in the second entry they mention playing with Urban Blight? I assume there was a UK band of the same name?

I would think so. The NYC-based Urban Blight started in the early 80's.

yeah, the Magic Six 45 didn't come out til what, 1983? Again, that's weird, never heard of an Urban Blight from the UK. When is the UB nyc feature coming?

A UB-NYC post has been in the works for some time now. Hoping to hear back from Keene Carse soon. Keep checking back.

Next up is The A-Kings!

Do you live in NYC?