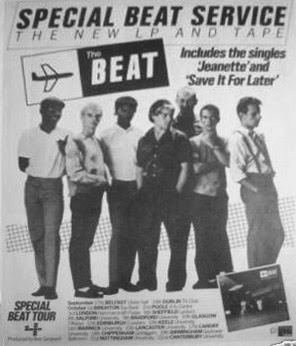 Fans of The Beat are always on the lookout for anything remotely new that they can add to the somewhat finite universe of recorded material that is available from the band. With only three albums and very few non-album tracks, its been, slim pickings for anything new. However, I recently heard two incredibly rare and unreleased tracks by the band which have been the holy grail for obsessive fans of the band.

Back in 1983, as the band was focused on breaking their 'Special Beat Service' LP in the U.S. (and were in the process of breaking up themselves), they returned to the U.K. to record a session for the Kid Jensen radio show on BBC 1. Rumor has it that the band recorded up to 4 new and never released songs during the session, including a lovely cover of Cole Porter's 'Night & Day'. As the band disintegrated and reformed as General Public and Fine Young Cannibals in 1984, the tracks recorded for those sessions were lost to the annals of time.

Though the tracks have remained elusive and hidden away, their existence has never been in doubt. In fact as far back as 1999, Dave Wakeling was quoted in a Rolling Stone story about the possible release of a greatest hits retrospective that would include rare tracks. "I'm told the labs in England had found some live tapes and maybe we'll put some of that on it," he says. "Somebody said there was an idea that they'd found a couple of tracks on the master reels that we'd never finished. Ah, 'contains previously released tracks.' It's probably because they were s---."

Now, 27 years later, the band's ultra smooth version of Cole's 'Night & Day' along with a funky number called 'It Makes Me Rock' featuring some seriously angular sax playing from Wesley Magoogan (think Oingo Boingo) have finally seen the light of day via an amazing mix of rarities, b-sides and 12" remixes posted by Liam Ska on his blog. The mix also includes the hard to find version of 'Rock The Casbah' by The Clash featuring Ranking Roger which was on Mick Jones mix of 'Rat Patrol From Fort Bragg' which would later be re-mixed and re-cut as 'Combat Rock'.
Below is the track listing for the mix along with notes about each song compiled by Liam Ska.

Great fun listening to these.
Many thanks.

Glad you are enjoying the tunes! It was great to finally hear the unreleased tracks.

I thought I saw a FYC recorded version of this same tune - the Cole Porter "Love For Sale" - is this the same track?

Hi McCrank. FYC did record Porter's 'Love For Sale' which leads me to believe it was one of the Cannibals who decided The Beat should cover 'Night & Day'. What do you think of the 2 unreleased tracks? I quite like 'It Makes Me Rock'.

Really glad to get this. Is there a disc 2?

Thanks Small Axe. Surf over to Liam Ska's site to download the other two discs he created.

Thanks for the link/download. Really enjoying your blog. Keep skanking.

Thanks for this. There's still one elusive track out there that I can't find.

I've heard what sounds to my ears like a full blown cover of Rock the Casbah by the Beat. It's not RR toasting over the original Clash song and it's not RR and Pato Banton covering. It's also not, I'm 90% certain, Mustapha Dance. I only heard a snippet (turned it into a ringtone) but the production value was too high for them not have completed the song.

ANY IDEAS AT ALL ARE GREATLY APPRECIATED.

Hello? Tell me you have the answer.

The song is out there and our lives are less meaningful without it.

Marco, just found your blog and I've enjoyed catching up on it. I totally missed this post back in Feb, though -- is there anywhere else I can download these files? BTW, I have that great BPM compilation on vinyl and CD -- took me ages to find it. Great blog -- still working my way through the archives.

Hi Jeff! Just realized the link is dead. If you send me your e-mail address I'll send you a fresh link for these tunes.

Same thing: been looking to get "Psychedelic Rockers" forever, and can't believe I missed the original posting and working link. Arrrgh.

I was finally able to re-collect the songs from this comp and will upload them in the next day or so. Check the link in a few days and it should be working again.

The link has been fixed and the mix has been uploaded. Enjoy!

Thanks a lot for all this, buddy.

A year after the event I've finally caught on - but better late than never....

This is fantastic. I heard the original broadcast of the mentioned Radio 1 session (ahem, yes, I am an oldie) and have been desperate to hear The Beat's version of 'Night and Day' again for something like 28 years. Thank you. You've made my day.

hey my name is jim and i check this blog a bunch. But now I see "Psychedelic Rockers" and the original "What Side of the Bed...?" is gone....is there any way you could re-up those??

Same as above, any chance of getting the missing tracks again? I love the Beat.

Hey just so everybody knows, "It Makes Me Rock" is now available in a proper studio version, along with the same performance of "Night And Day" on the reissue of Special Beat Service. And everything else is also available now, except for "Pussy Price".

Incredible. You are so kind for leaving a treasure such as this. I love the mixes and dubs. Thanks so much.