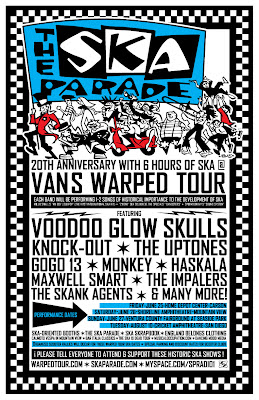 While ska took root all over the U.S. in the 80's and 90's, it has always been most popular in California, particularly Los Angeles and Orange County. Starting with The Untouchables in the 80's to Fishbone, No Doubt, the crop of bands that rode the 90's 3rd wave revival (Reel Big Fish, Save Ferris) and current bands like The Aggrolites, musicians and fans living in California have had a long standing love affair with the sound of ska.
One Californian who has consistently championed ska in its many splendored forms is Tazy Phyllipz. He has documented the California and U.S. ska scenes for two decades now, hosting 'The Ska Parade' radio show. Over the years he has also produced many live concerts, a video documenting the California ska scene, and a number of compilations of California ska including 'Step On It: The Best of the Ska Parade' and 'Runnin' Naked Thru The Cornfield.'
To celebrate the twentieth anniversary of 'The Ska Parade' radio and online show (which helped to launch and support the careers of No Doubt, Sublime and other 3rd wave American ska bands), Phyllipz has teamed up with the Van's Warped Tour, and will be hosting '6 Hours Of Ska' at four California dates during this year's tour. At each show, a hand-picked group of ska bands will be performing 1-2 songs of historical importance to the development of ska as part of their sets (e.g., 1964 Millie Small's 'My Boy Lollipop'; 1979 2-Tone ska; 90's Third Wave American ska)
The bands performing include and who's who of California-based ska bands from the last twenty years including:
VOODOO GLOW SKULLS
KNOCK-OUT
THE UPTONES (who have posted their set list on their Web site)
GOGO13
MONKEY
HASKALA
MAXWELL SMART
THE IMPALERS
THE SKANK AGENTS

For more information visit the Van's Warped Tour Web site or The Ska Parade Web site.
Posted by Marco On The Bass at 5:12 PM