Bob Marley Meets The Jackson 5 In Jamaica in 1975! 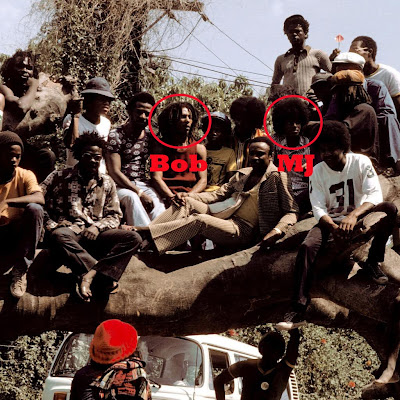 I recently came across some amazing historical photos of Bob Marley and member of The Wailers meeting Michael Jackson and The Jackson 5 at Marley’s house in Jamaica in March of 1975.  It was a momentous time for both as the Jackson 5 had officially left Motown, the record label responsible for turning the group into the first black teen idols, appealing to both black and white audiences. It was also the year Bob Marley had his international breakthrough with "No Woman No Cry" from the Natty Dread album.

At the invitation of opposition leader Edward Seaga (who was previously a music promoter in Jamaica before entering politics), The Jackson 5 and their entourage traveled to the island to to open for Marley and his  band at the National Heroes Stadium. Before the concert, the band visited Marley at his home at 56 Hope St. in Kingston. A number of pictures of the meeting were taken to mark the historic occasion including the picture at the top of the post. 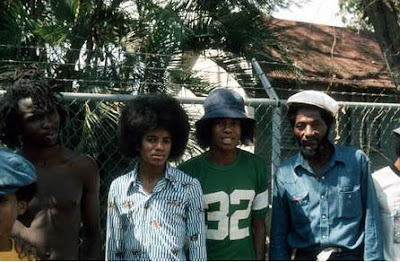 While no audio or video of the concert exists, below are rare photos of The Jackson 5 taken during their opening set:

Finally, below are a few more Jackson 5/reggae related musical connections.  The first is video from a Jackson 5 television special from 1977 featuring a medley of songs including The Wailer's iconic "I Shot The Sheriff."

Here is a personal favorite of mine.  Its a reggae version of Michael Jackson's chart topping "Shake Your Body" that was recorded by Little Carlos in 1981. The singer is such a MJ sound alike that for a time I was convinced that the King Of Pop had recorded a reggae version of his own song!  Enjoy!

Excellent piece of information, I had come to know about your website from my friend kishore, pune,i have read atleast 8 posts of yours by now, and let me tell you, your site gives the best and the most interesting information. This is just the kind of information that i had been looking for, i'm already your rss reader now and i would regularly watch out for the new posts, once again hats off to you! Thanx a lot once again, Regards, bob marley quotes

Actually, that's Jermaine, not Jackie, in the picture with Michael and Bunny Wailer.