Haircut One Hundred Reunites To Perform 'Pelican West' In London On January 28th! 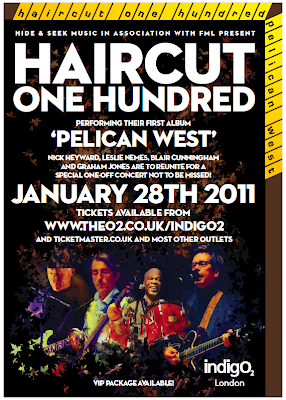 I'm proud to announce that I am an unabashed fan of Haircut One Hundred.  The band's sunshine pop sound fused funk and jazz and led a whole legion of fans to experience the delights of a world filled with 'Lemon Firebrigades' and the possibility of 'Boy Meets Girl'. Their album 'Pelican West' is a gem of innocent pop wonder and a much loved treasure of many a forty something teenager. So, indulge me if you will kind readers, for a rare non-ska post, as I share my excitement about an album that I played nearly as much as ones by my many 2-Tone era favorites.

The exciting news is that four of the original band members, Nick Heyward, (vocals and guitar), Graham Jones (guitar), Leslie Nemes (bass) and Blair Cunningham (drums) are reuniting for a special performance at London’s indig02 venue on Friday January 28th. The band will recreate their trademark sound with a performance of the entire 'Pelican West' album in its entirety, including the top 10 hits ‘Favourite Shirt (Boy Meet’s Girl)’, ‘Fantastic Day’ and ‘ Love Plus One’.  This is not the first time the group has played together since breaking up in 1984 shortly after Heyward's departure. The members were featured in VH-1's 'Bands Reunited' show in 2004 and played a one-off performance at London's Cadigan Hall in 2009.

Below is a live version of 'Favourite Shirt (Boy Meets Girl) and 'Kingsize' from 1982 that also includes a short band interview :

One of the reasons that I'm such a fan of the album is likely due to the production work of Bob Sargeant who made his name producing all three albums by The Beat. In fact, 'Pelican West' and 'Special Beat Service' share many of the same characteristics of guitar driven pop mixed with percussion and horns (in fact The Haircuts percussionist Mark Fox also played on 'Special Beat Service' further cementing the link).  Both band's enjoyed musical breakthroughs in the U.S. as a result of Sargeant's production work and were considered part of the early 80's 'new wave' invasion.

As a very special treat for those among you who may share my affections for The Haircuts, below is a  live recording of a show the band performed at The Rox Southgate in London almost 30 years ago on November 30, 1981.  It includes nearly all the songs from Pelican West as well as a cover of 'Low Rider'! Have a listen and enjoy!