This Is Ska - Watch The Original 1964 Documentary In Its Entirety 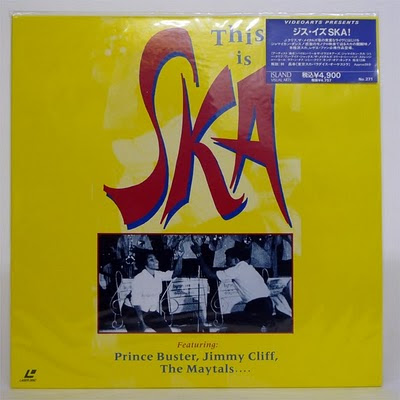 In honor of both the Reggae Britannia live show and documentary and the upcoming London International Ska Festival, which includes a number of original Jamaican reggae and rocksteady artists from the 60's and 70's, I wanted to post about the very rare 'This Is Ska' film/documentary that was originally released in 1964.

Running just under 40 minutes and filmed on location in Kingston, Jamaica, it features performances by a who's who of up-and-coming ska artists of the day including Prince Buster, Jimmy Cliff and The Maytals. They would all later go on to create rocksteady and early reggae hits that changed the course of music history around the world, influencing multiple generations of musicians including the entire roster of 2-Tone bands.  After watching the film, I can't help but wonder if it inspired Jerry Dammers to film 'Dance Craze.'

The line-up and songs performed in order of appearance incldue:

While the film has never been officially released on DVD, it came out on VHS and Laserdisc in Japan in the late 1980's. According to a Swedish music blog, a television show there announced they had 'discovered' the film on a trip to Kingston in 2000 and aired the film.  If they had done a simple Google search they could have discovered that the film wasn't lost at all!

Now through the magic of YouTube, you can watch the entire film below.  Enjoy!

This was also available in Australia in the late 80s. I have a copy, but sadly I no longer have a working VCR. In an age before the internet, it was a very good reference (along with the Trojan Story on vinyl) for those interested in original ska.

If the presenter looks vaguely familiar to anyone, that's probably because it is Edward Seaga who later went on to become Jamaica's fifth Prime Minister (JLP - Jamaican Labour Party). But in the 60's Seaga was a music promoter and the owner of the West Indies Records Ltd (WIRL) label which he sold on to Byron Lee (the band leader in the video) in 1968. Most non-Jamaican reggae fans' overriding memory of Seaga will be from the 1978 One Love Concert when Bob Marley got Seaga and his rival, Michael Manley, to shake hands on stage in front of the whole nation.

I got a VHS copy in the UK late 80's, still got it at home somewhere - with no video to play it on. Wonderful film.

I got a bootleg DVD copy of this off eBay quite a few years ago. It's a pretty decent transfer. I saw the laserdisc show up on eBay once, but they wanted way to much for it!

Thanks for posting this! I've only caught snippets of it over the years. Good to see the whole thing.

Marco - or anyone? - any chance this has been saved by prudent users as an MP4? It's off Youtube and I only found out about it today...much respect if possible. Much respect anyway, come to that, great blog!

As the last comments mention the full movie that you embedded is gone but if you use the link to my blog (i.e. the "Swedish" blog mentioned in the above) you can watch another YouTube upload of the film. It's in four parts. You might like to post that here instead.