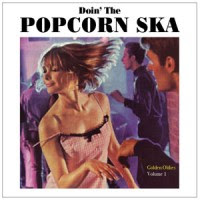 While Jamaican ska was originally influenced by the sound of American R&B and jazz picked up in Kingston from radio broadcasts in New Orleans and Miami, the sound of early 60's ska also had an impact on American pop music of the same era.  Most of this can be traced directly back to Millie Small's smash 'My Boy Lollipop' which hit #2 in both the U.S. and U.K. and which introduced the ska rhythm to American ears for the first time. Small's version of 'My Boy Lollipop (which was originally written by American doo wop group The Cadillacs in the late 1950's) sold over six million records worldwide and helped to launch Island Records into mainstream popular music. It remains one of the best-selling reggae/ska hits of all time.

For a time, thanks to Small, the ska rhythm was all the rage with American musical producers who saw it as the latest fad to get American teens dancing and buying more records.  To that end, the people behind the Ska Boots series are about to release a four track EP 'Doin' The Popcorn Ska', which honors this uniquely teen/crooner style of ska-pop/doo-wop.  Surprisingly the 7" (which is available on vinyl from Piccadilly Records in the U.K.) features uniquely American artists -- Neil Sedaka, Annette Funicello and The Fleetwoods -- much better known for their 60's American vocal pop hits than for ska.

The A-side of the EP opens with Neil Sedaka's B-movie gem 'Do The Jellyfish', taken from the terrible 1964 B-movie horror flick 'Sting Of Death'.  Next up is Annette Funicello (from the Mickey Mouse Club) singing her original early 60's version teen-pop cut 'Jamaica Ska' (which she later reprised with backing from Fishbone for the 1987 teen flick 'Back To The Beach').  The B-side features The Fleetwoods' 'Ska Light Ska Bright', which is surprisingly good considering their white bread appeal, and the EP closes with Baby Earl & The Trini-Dads' ace 'Back Slop' which was the alias for soul group The Church Street Five and sax player Earl Swanson who backed Gray 'U.S.' Bonds and Jimmy Soul.  Its the pick of the litter, sounding like an early 60's outtake from The Skatalites.

I nearly clicked off the Neil Sedaka track, the lyrics are just too painful, then at around 2 minutes it suddenly got better but it's a shame the bass player stuck with the Country-style umpah bassline instead of syncopating!

The Fleetwoods, now there's a shocker! Sounds like a Jamaican recording, in fact, I'll stick my neck out and say this MUST have been recorded in Jamaica with Jamaican musicians. Heck, even the vocal inflections and timings sound Jamaican. But it's the kick-drum and bass locking that really makes me think it's a Jamaican recording, even bebop/hardbop musicians don't lock with that kind of fluidity. Is the provinence of this recording certified? Is it really the Fleetwoods, or could it possibly be some Jamaican vocal trio doing a Fleetwoods cover? I'm skeptical.

My first reaction to Back Slop was "oh no, another 12 bar blues riff" but then it developed into the funkiest soul/boogaloo/ska crossover I've ever heard, grooooovy baby! At 2:41, it's way too short. Nothing popcorn about this one.

Popcorn Ska is one of my favorite 'ska oddity' sub-genres! I'm really glad some of this stuff is seeing a new day-

Here's a link where you can get a few of these tracks, plus more-
http://v-rocket.blogspot.com/2006/07/ska-ska-ska.html

I understand that this is considered music sharing, so feel free to delete my comment ;)

Fascinating stuff as usual Marco.
Thanks.