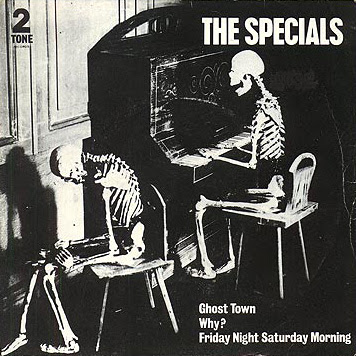 It was 30 years ago this week that The Specials iconic 'Ghost Town' went to the top of the charts in the U.K.  Inspired by the sight of elderly women selling their possessions on the Glasgow streets. Jerry Dammers later said, "In Glasgow, there were these little old ladies on the streets selling all their household goods, their cups and saucers. It was unbelievable. It was clear that something was very, very wrong."

By the time the Specials met in early 1981 to record Ghost Town, the band was in its death throes.  "Everybody was stood in different parts of this huge room with their equipment, no one talking," bassist Horace Panter remembers. "Jerry stormed out a couple of times virtually in tears and I went after him, 'Calm down, calm down.'" It was hell to be around."

"People weren't cooperating," says Dammers. "Ghost Town wasn't a free-for-all jam session. Every little bit was worked out and composed, all the different parts, I'd been working on it for at least a year, trying out every conceivable chord. It was a combination of the first album and the second album, the complete history of the band gelled in one song. I can remember walking out of a rehearsal in total despair because Neville would not try the ideas. You know the brass bit is kind of jazzy, it has a dischord? I remember Lynval rushing into the control room while they were doing it going, 'No, no, no, it sounds wrong! Wrong! Wrong!' In the meantime, Roddy's trying to kick a hole through the wall from the control room to the studio room. It was only a little studio in Leamington and the engineer was going, 'If that doesn't stop, you're going to have to leave!' I was saying, 'No! No! This is the greatest record that's ever been made in the history of anything! You can't stop now!'" The song was the end of the road for the band as Terry Hall, Lynval Golding and Neville Staple quit the band following what should have been their crowning achievement on Top Of The Pops.

To mark the occasion, The Independent newspaper in the U.K. published a story yesterday that includes interviews with a who's who of band members, musicians, politicians and writers to help put the song into context. Here is a smattering of a few quotes including band members Dammers, Panter and John Rivers, the recording engineer for the 'Ghost Town' session:


"There was a riot in Brixton about a year before the record came out. I was writing the song partly about that. Also, Britain was falling apart. The car industry was closing down in Coventry. We were touring, so we saw a lot of it. Liverpool and Glasgow were particularly bad. The overall sense I wanted to convey was impending doom. There were weird, diminished chords: certain members of the band resented the song and wanted the simple chords they were used to playing on the first album. It's hard to explain how powerful it sounded. We had almost been written off and then 'Ghost Town' came out of the blue."


"It was a reggae tune, but it had this kind of Middle Eastern melody on top of it. When it was released, Melody Maker thought it was great, but NME and Sounds thought it was not as good. It wasn't an instant hit – it was quite dark.

I'm thrilled that it was recorded in the small basement of a row of terrace houses in Leamington. It was around the time bands were going to Montserrat to record albums in 96-track studios. The Specials went to a little town in the Midlands and recorded on eight-track. The week after the song was released, there were riots and civil disobedience all over the country. It was a strange moment."


"The recording of the three songs of the EP took about 10 days. I remember the producer, John Collins, making only one suggestion throughout the session, but he did do the mix, which is great. I had all the misery – there were problems with people being 'incapable'. I remember vividly that crazy vocal bit in the middle – when Jerry started humming that at us we thought he'd gone lunatic. But he was a determined man, and he was right. It's genius. And the flute part was recorded in the hall of my house. Horace [Panter], Brad [John Bradbury] and Lynval [Golding] were the greatest rhythm section I've worked with."

Below is the 'Ghost Town' video, a manic joyride in a Vauxhall Crest through post-apocalyptically empty London streets as well as the band's swan song performance on Top Of The Pops.

Sheesh, you're making me feel old! Still a great tune, and it's stood the test of time well - I don't think there has ever been another song in the British charts since that betters the creativity in that song or that tapped the zeitgeist so perfectly.