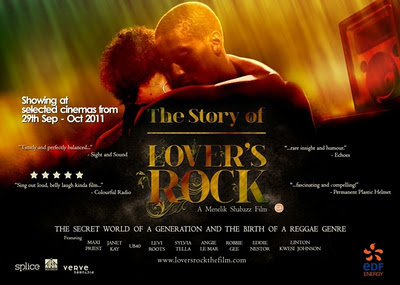 The Story of Lovers Rock, a feature length documentary from director Menelik Shabazz, tells the unique story of a music that defined a generation of Black British culture in the late 70s and 80s. Lovers Rock is romantic reggae that was uniquely British and developed against a backdrop of riots, racial tensions and the stirrings of multiculturalism.  Initially it developed among a small scene of musicians and performers based in South London but quickly grew to become a global brand picked up by bands like UB40, Culture Club and Maxi Priest and was name checked by The Clash in their song of the same name.

Currently enjoying a successful theatrical run in the UK, the film will open the African Diaspora International Film Festival 2011 on Friday, November 25 at the Thalia Theater at Symphony Space here in New York City, in a program that also includes Shabazz’ 1981 narrative film Burning an Illusion.

The roots of Lovers Rock lie in the early days of reggae, with Jamaican and American singers such as Ken Boothe, Johnny Nash, and John Holt enjoying international hits with reggae versions of well-known love songs. It was a style that resonated with the London reggae scene and became an apolitical response to the conscious Rastafarian sound dominant in Jamaica at the time. The style combined the popular 70's sounds of Chicago and Philadelphia soul with reggae basslines and rhythms.

Taking root in the Sound systems of South London, the genre coalesced around the DIY Lovers Rock record label founded by Dennis Bovell which gave the genre its name.  The songs and sounds quickly appealed to women and produced many female stars including Carroll Thompson, Janet Kay and the vocal trio 15-16-17 spawning the distinctive young girl female sound associated with early lovers rock.

The documentary is currently showing in select theaters across London, Birmingham and other cities. Check the screening section of the film website for locations. Tickets for the one time screening at the Symphony Space in New York City are available thorough the African Diaspora International Film Festival website.

Watch the trailer for the documentary below:

Watch a two part Q&A with the documentary director Menelik Shabazz below:

Hi! This is certainly an informative blog! I have heard a lot about this documentary story! And, I am excited for its screening. However, I am planning to visit the Thessaloniki International Film Festival this year. Could you suggest me something about it? What are movies will they screen this year?