An Ode To 'Cod Reggae': A Look Back At Some Of The Worst Reggae Inspired Music Ever Recorded 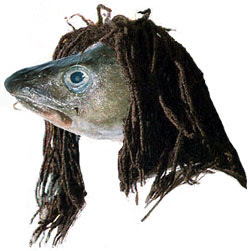 I strive to celebrate and venerate the best of ska and reggae music on this blog.  The many artists who made the music a cultural phenomena are all heroes to me and many others.  However, as ska and reggae music made its way into the charts of the U.K. (and the U.S, to a lesser extent) and its influence and popularity spread, many mainstream singers, bands and musical artists began including the rhythms and sound in their own songs. Some of these efforts were magnificent and some less so. Others were just plain terrible.

I've previously highlighted some of the better attempts at this (see Paul Simon, Blondie and Johnny Nash), However, I felt it was high time I trained the spotlight on some of the more dreadful attempts of what the Brits call 'Cod Reggae' (which is a term I have always loved). This list is neither exhaustive or complete and focuses on the late 60's and 70's. (I'll look to do a similar post for the 80's and 90's in the new year). With reggae making real inroads in the U.K. and the U.S. musically in the late 60's to mid 70's I looked for reggae and Caribbean music from the era that actually did the genre no favors artistically.  So without further ado I present a selection of some of the worst attempts to play this beautiful music.  Consider yourself warned!

But first, let me say I am an open minded fan of calypso, ska, reggae and all other forms of Caribbean music. While there are certainly social, political cultural reasons why 'cod reggae' tracks may be more popular with mainstream audiences then than tracks recorded by the original artists (e.g. racism), what I will say is that I have a real soft spot for certain musicians' attempts to 'go reggae'. They never get it quite right, but it can often result in something really interesting and different. This post is about those attempts that don't get it right!

The grandfather of 'cod reggae' music has to be Bernard Cribbins and his 1962 track ‘Gossip Calypso'. The song was inspired by Lord Kitchener's wonderful ‘London is the Place for Me’ which is a gorgeous ballad that extols the beauty and splendor of London from a recent Jamaican immigrant's perspective. I can't say the same for Mr Cribbins' attempt which sounds like an outtake from a bad Saturday night variety show as sung by a comic.

A few years later saw Millie Small's joyful ‘My Boy Lollipop’ hitting the charts, riding a wave that included Prince Buster, John Holt, Ken Boothe, Desmond Dekker and Jimmy Cliff. From these great moments, one of the most awful sub-genres, loomed. Calypso required huge bands and great skill, but reggae was much easier to recreate to the ears of the uneducated. Reggae sounded like two chords, a jaunty bass line and required a singer to pipe “dat” instead of “that”. While The Beatles's 'Ob la di, Ob la da' is likely the first massive 'cod reggae' hit, it inspired Marmalade's cover version which was likely totally unnecessary (though it may be better than Sir Paul's version and hit #1 in the U.K. pop charts in 1969!).

But I've saved the worst for last. My all time favorite worst 'cod reggae' song has to be Paul Nicholas and his song 'Reggae Like It Used To Be'. Nicholas was better known on this side of the pond for his hit 'Heaven On The Seventh Floor' which I distinctly remember dancing to at a 6th or 7th grade dance in the late 70's. It wasn't until very recently that I was introduced to his left turn into reggae. Here it is as performed on Top Of The Pops in May 1976. The song actually reached #17 in the charts which doesn't speak kindly to the taste of the British listening public! Luckily, punk and 2-Tone were just months away from washing this type of clap trap off the charts.

And before I go, here is truly awful piece of 'cod reggae as performed by 60's pop icon Sandie Shaw on a popular British TV show called '2 G's and The Pop People' in 1972. In a word this is 'horrendous'! Sadly the song borders on the worst aspects of minstrel. And while Shaw was no racist, this was the era of television when Black and White artists sadly remained mostly separate. You may want to clean your ears out with soap after listening to this one!

Yeah, that Sandie Shaw track is pretty odious. There's a brief shot at 1:13 of...who? Other performers? ....reacting negatively to the performance.


...and I thought this was bad:
http://www.youtube.com/watch?v=MFeJJAQPiK4

Yeah, but that's a comedy record and I generally give them a hall pass as they're not intended seriously.

How do you feel about 10CC's "Dreadlock Holiday?

If you want modern cod reggae then look no further than the abomination that is Superheavy - Mick Jaggers' atrocious 'supergroup' that taints the memories of the Marley legacy, the Rolling Stones and ...well, I have no good memories of Joss Stone to start with.
http://www.youtube.com/watch?v=MFeJJAQPiK4 but bring your own ear bleach for afterwards.

WOAH..... yup that is the most awful thing I've ever heard. Come back Bernard Cribbens and AcidSka all is forgiven....

Brilliant blog though, I dont often read every word, you obviously know your stuff Marco...

PS What of Lance Percivals calypso recordings of the 50's, that was his "thing", possibly B4 Bernard, I think he even does the odd song in old Brit comedies. Also Johnny Nash recorded lots of stuff for the Argo arm of the US Chess label, "Love Aint Nothin But A Monkey On My Back" has that plodding RnB "Popeye" Riff that so influenced Ska although its release year was 1964 so It wasn't one of them. (Hey Marco I love Jamaican RnB & Shuffle and the records that influenced those tunes any chance of an article?) Totally off subject there, sorry! SO heres more on (maybe) Cod Reggae... What about Chris Farlowe as the Beezers - The Bluebeat 1964(http://youtu.be/xHQEQZr_E9o )
and Georgie Fame and the Blue Flames - Bluebeat EP also 64 (http://youtu.be/obFM82DB1ZI )? I expect those tracks were recorded as genuine heartfelt tributes as both musicians played almost all African American based tunes in their early careers, but all the same they are cringworthy in places. Thanks again
Pete