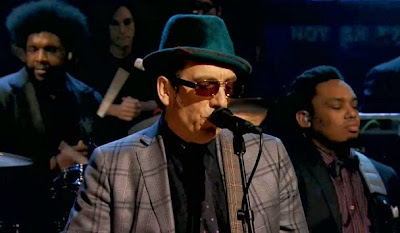 Earlier this week Elvis Costello and the Roots celebrated the release of their new album "Wise Up Ghost" with a one-off, sold out concert at Brooklyn Bowl in Williamsburg. Along with performing tracks from the new album and takes on some iconic Costello songs (“Watching The Detectives,” “Shabby Doll,” an extended “I Want You”), the group played an amazing version of "Ghost Town" by the Specials. Check it out!

More bum notes than a bag-o-bums.