Pauline Black: The Queen Of Ska Interviewed On WNYC Radio 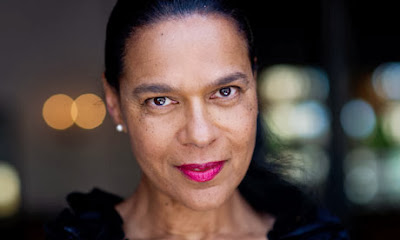 While in New York late last month, Pauline Black of The Selecter stopped by the venerable New York radio station WNYC for an interview with Sound Check host John Schaefer. The interview was posted late last week a few days after the bands triumphant show at the Grammercy Theatre.

Black is in fine form during the nearly 20 minute interview touching on her experiences being adopted, the appeal of Motown music on her as a teen and her life and times in one of 2 Tone's leading band.

Have a listen to the interview below and read excerpts below:

Pauline Black, on how being adopted shaped her:

I do still consider myself, to a certain extent, to be an outsider. I'm mixed-race. My father was Nigerian, my mother was Jewish. I was adopted by working-class white parents in London. By the time I was four years old I was ready to go to school so they had to tell me something because, you know, kids always point out the elephant in the room. I was definitely the elephant in the room in the school I went to. It didn't come as a a shock necessarily. It did make me think. Obviously, it gives you identity issues I suppose as you grow into teenage years. Everybody has identity problems at that time. Not knowing your mother or your father - your real mother or father- it does tend to make you a little more insecure than you would normally be.

On how Motown appealed to her as a teenager:

It was like the information was coming from America about what it meant to be Black. I mean, James Brown named the nation Black and I thought, 'Yep, that's for me.' .... The video of [Aretha Franklin] strutting down the street singing ["Respect"] at full voice to a little Black kid in Britain, that meant a lot.

On Made In Britain [we were] saying 'whatever color you are, we're here. Somehow we have to deal with each other, and that is the future, and what comes out of that.' String Theory is really just taking it on and thinking about my scientific background. String Theory would suggest that we're all made of the same stuff, these little vibrating strings are all the way through the universe. That's what connects us. It seemed to be this lovely connect with our past, this string that we were following from 1979 to present day. Really saying, that we are all the same. All we have to do is embrace the fact that at the end of the day we all are human beings and the best thing we can do is stop ourselves from messing this planet up more than we have already.
Posted by Marco On The Bass at 7:19 PM

Marco, do you have perhaps the whole transmission of the program recorded?