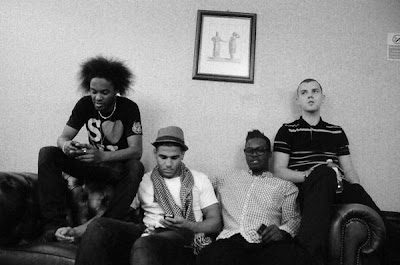 Now that the initial excitement about The Specials UK reunion shows has finally settled, there has been much speculation about which band or bands may be tapped as support acts. Rumor has it that one member of The Specials favors up and comers Kid British. The band – a multi-racial seven-piece who look like The Specials but sound like a melting pot of The Specials/Madness/Gorillaz/Outkast/Blur – have just released a 3 song EP titled "Leave London" featuring 'Leave London', 'She Will Leave' and the single 'Elizabeth' which sounds like a ska version of a Franz Ferdinand tune. The band has already endeared themselves to 2-Tone fans with their clever 'Our House Is Dadless' which includes a memorable sample of the Madness classic 'Our House'. The band head out on a big UK tour supporting The Enemy in March. Interestingly their tour calendar remains open for next April and May....

The band consists of James Mayer (vocals), Adio Marchant (vocals), Simeon Mclean (vocals), Sean Mbaya (vocals, guitar, keyboards, sax), Tom Peak (bass), Domonick Allen (rhythm guitar) and Mikey Wilson (drums). Here is a short interview with James that was published in the The Sun on January 1st that tips them as one of the hottest acts of 2009:

Why will 2009 belong to you?
We’ve always welcomed in the year by saying: “This year will be our year, lads.” We didn’t last year and it’s been a really good year for us. So we’ll be doing the same this New Year’s Eve and hoping the theory works.

How and when did you start making music?
Me (James), Adio and Simeon all went to the same school and have been making music ever since. Our music style progressed from garage to R’n’B and hip-hop and then we met Sean who was working as a producer. Slowly our sound started to incorporate indie and reggae.

Why Kid British?
That was a name Sean had when we met.

Is your album ready? When will we hear it?
It should be polished off early in the New Year and in the shops some time in the late spring.

What are the stand-out tracks?
All of them.

Coming from Manchester, has the city influenced your music?
It has an amazing musical heritage but as a new band starting out, it doesn’t mean we have to be like or emulate bands such as Oasis or The Stone Roses.

Describe your sound?
A mixture of Blur, The Specials, Mike Skinner and Outkast.

Do you think you’ll be able to make a good living out of music?
That’s the plan otherwise we wouldn’t be doing this. Everyone’s got bills to pay.

What other bands/acts/singers do you rate for 2009?
2009 will be a Blur! Blur are highly rated by us for next year. The Specials are back too though and possibly even The Stone Roses . . .

What’s your New Year resolution?
To go to the gym. And Kid British to take over the solar system.

Kid British - Don't Listen To Annie
Posted by Marco On The Bass at 8:39 AM

Great post Marco I didn't know this band... And the download is not available for the non uk resideants, it's a real pity and something rellay wrong (discrimination ?)
But great post Keep up Marco

All the best
Judge