Living in the digital age of the 21st century its hard to even fathom the small innovations that the music industry rolled out in the early 80's. Remember Sony Walkman cassette players? What about Flexi-Discs?

For the uninitiated Flexi-Discs (or Flexis) were records pressed onto thin, flexible vinyl. They were really cheap, easier and faster to produce and press than conventional records, and their form meant that they could be included in a magazine or book with little trouble. For what they were, the fidelity of Flexis wasn't too bad. Their light weight often made them slip on a turntable, so many Flexis had a space for taping on a penny - sorta lo-fi & DIY. Personally, I found that after just a few plays they had already worn out their welcome...

The earliest flexis originated in the UK during the mid-1950's and were manufactured to be played at 78 RPM. Flexis came of age in the 1960s when The Beatles sent out flexis featuring interviews with the band and Christmas wishes with their annual fan club newsletters. Later, flexis were widely used as promotional tools and magazine freebies. Both the NME and Melody Maker competed for readers by affixing flexis to their covers with unreleased tracks and excerpts of music from various bands. The flexi was not necessarily seen as a prestige item and rival magazines in the 80s made big play of their ability to substitute the flexi with conventional 7" singles, referred to as "Hard Vinyl" 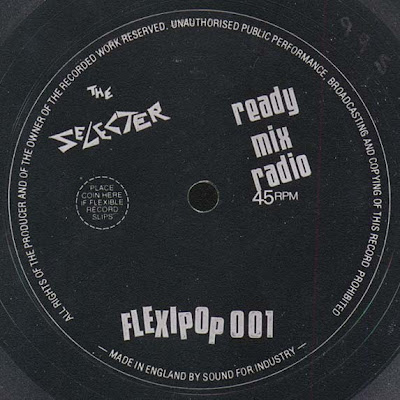 However, for fans of 2-Tone and 80's British new wave and punk, Flexipop Magazine was well known and famous for bringing the flexi back in vogue in the UK during the 80s. Launched in 1980 by ex-Record Mirror journalists Barry Cain and Tim Lott, the magazine featured a flexidisc in each issue, usually unique to the issue. Interestingly, the first ever issue of the magazine contained a 2-Tone bonaza of materials including The Selecter's "Ready Mix Radio", which was a dub version of "On Your Radio" as well as photo stories of The Selecter and Bad Manners, live photos of The Specials on tour as well as a Madness band factfile. 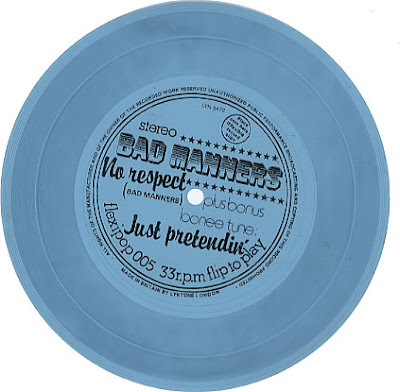 According to the 2-Tone Info Web site, this flexidisc came free with the first ever issue of the magazine FlexiPop. Like most flexidsics playing it was easier said than done. This remix of the bands single 'On My Radio' is mostly instrumental in nature and is unavailable on any other format. The magazine is an interesting item in itself aside from the flexidisc, it includes features on all of the bands on Dance Craze with the exception of The Beat. The Selecter, The Bodysnatchers & Bad Manners each have silly photo stories... there's a typical Madness band members factfile and a nice three page spread of photos of The Specials by The Specials on tour. There's also a really nice promo for More Specials on the magazine back cover and a competition to win said photos & autographed copies of More Specials to boot... not bad for 60p.

Below are the photo series of the The Selecter and Bad Manners from the first issue of Flexi-Pop as well as the three page spread of photos of The Specials on tour and a Madness factfile. At the bottom of the post is the download of "Ready Mix Radio" by The Selecter and 'No Respect" by Bad Manners courtesy of Judge Fredd at The Beef, The Original and The Cover and 2-Tone collector and expert Liam. The images are very large, so click on them to see them in their full size as they cut off a bit in the blog format.

Below is the download of The Selecter's Flexipop Magazine single 'Ready Mix Radio' from Issue 1 in 1980 and the Bad Manners Flexipop single 'No Respect' Blue Flexidisc:

what an epic post! it was like seeing an old lover again after ten years . . . but then it was REALLY like that because all the anticipation for that selecter link went gone the moment i realized the file had also went gone.

so thank you. any chance of a reup?

Thnaks very much for the kind comment. I checked the link and it should be working now. Enjoy the mix!

thanks, marco -- getting it now, can't wait for the listen and looking forward to anything else you see fit to post in the future.

"The Soviet-era bones or roentgenizdat are so-called because one cheap, reliable source of suitable raw material is discarded medical x-rays, which have the added benefit of including ready-made and interesting images. The nameroentgenizdat comes from the combination of roentgen ray (another word for X-ray) and samizdat ("self-published", or underground literature). X-ray records emerged as an underground medium for distribution of jazz music, which was prohibited in the Soviet Union after World War II. This format was also particularly attractive to politically suppressed punk rock music and the DIY punk ethic, since other publishing outlets were much less accessible.
See also McDonald's Menu Song"

Suppose we can get The Busters' "Mickey Mouse in Moscow" on flexi?