A Halloween Story: The Song That Inspired The Recording of Ghost Town by The Specials 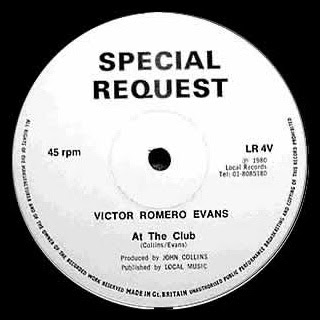 Here is a trivia question for all fans of The Specials and 2-Tone. Have you ever heard of John Collins? How about Victor Romero Evans? If you haven't you are in good company.  You can thank them both for their direct and indirect roles in the recording of one of The Specials greatest songs 'Ghost Town'.

John Collins, a North London-based music producer and owner of Local Records was drafted in to produce 2-Tone's finest moment, 'Ghost Town' after Jerry Dammers lauded his production on Victor Romero Evan's Lover's Rock hit 'At The Club'.  Collins got his start working with local talent, using home made equipment and recording in a front room on a 4-track TASCAM recorder in North London.  He founded Local Records in the late 1970's and it quickly came to the forefront of the post-punk DIY record label boom - making reggae and dance records, selling them through shops and later topping the UK reggae charts and the national charts.
But, it all started with one record - 'At The Club' which Collins recorded with Victor Romero Evans.  Evans was a up and coming UK movie and TV actor and singer, who appeared in the 1980 UK reggae movie 'Babylon'.  The song became a hit quickly, spending five weeks at #1 on the UK reggae charts in 1980.  Part of the reason the track became a hit was production techniques employed by Collins.  It was the first track to use a homemade drum machine sound and the rhythm copied 'Another One Bites The Dust' by Jamaican-based Clint Eastwood making it instantly recognizable.  The song reached a broader audience after Jerry Dammers heard it and later voted it his record of the year in New Music Express, which landed Collins a deal with Epic Records.

Dammers was smitten with the track and in March of 1981 phoned Collins up to invite him to produce The Specials next batch of songs.  Suspicious that it was some sort of joke, he agreed to travel up to Coventry a couple of days later to meet the band and was surprised to find that they were serious. They were surprised to discover that he was white.
After recording two major label records, Dammers had become disillusioned with high tech, expensive studios and liked Collins homemade approach and reggae credentials. Dammers had found a small 8-track studio in Leamington and it was decided to go there to record three songs for the band’s next single. According to Collins, The Specials usually recorded by all playing together live, but he was used to building a backing track bit by bit. It was in this fashion that he got drummer John Bradbury to set up just his bass drum, snare and hi hat; and bass player Horace Panter to plug directly into the mixer, going for a Sly and Robbie sound.
According to an interview Collins did with 2-Tone.info, 'Ghost Town' may have been influenced by another song.  "I took a 12" of "What A Feeling" by Gregory Isaacs to Woodbine to test the sound of the monitors. It's a Sly and Robbie rhythm similar to Gregory Isaacs' "Night Nurse". I think this influenced Brad's playing, it certainly influenced me in getting the drum sound.. Also I had used the idea of fading up a track through a sound effect on "Lift Off", the B-side of "At The Club", and the idea of fading out under a sound effect on "Working Dub", which I had put out on Local Records previously."

Collins has posted a great article on his own Web site about the genesis of recording 'Ghost Town' as well his experience working with The Specials.  I've always been struck by the eerie ghost sound effect at the start and end of the song which makes the track so haunting. According to Collins, the sound was hand created by a home made synthesizer dropped in at the start of the final mix, fading up The Specials from Brad’s drum count-in and fading down the synthesiser under Jerry’s chromatic diminished chord sequence.  At the end, he muted everything apart from bass, drums and backing vocals, dub style, and faded the ghost synth back up just before The Specials come to a halt, leaving the synth on its own again for a few seconds before the final fade. And there you have it - the production of a masterpiece.
You can read more about Collins and Local Records at his Web site where you can purchase copies of all of his music.  You can also hear more tracks recorded by Victor Romero Evans at his Web site.