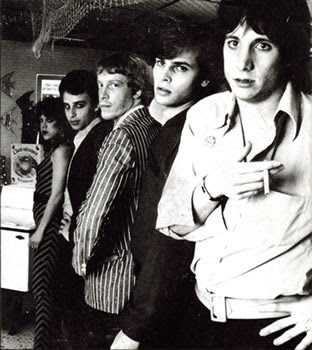 I'm happy to report that interest in The Boxboys has increased a bit since I posted an interview with the band's original singer Betsy Weiss earlier this year. I discovered that the younger brother of the band's saxophone player David Burg has started a MySpace page dedicated to the band and is looking to connect with anyone who may have pictures, audio or video of the band playing anywhere around Los Angeles in the late 70's - early 80's.

As it turns out, another relative of the band's guitarist, Larry Monroe Monroe, has posted live audio of the band on a YouTube channel. Apparently he's the boyfriend of Monroe Monroe's daughter. Monroe Monroe passed away a few years ago and left his daughter with a lot of Boxboys paraphernalia, including American Masquerade records, boxes of tape recordings, and much of their advertising materials and O.N. Klub flyers. I'm hoping to make contact with him to find out about hearing some of these recordings and seeing the flyers.
In the meantime, here is the recording that was posted (with a promise of more to come). It's a live recording of The Boxboys at the O.N Klub in Los Angeles on October 12th, 1980 performing the song 'American Masquerade'. The song was recorded and released as one of their two singles. The band line-up for this live recording includes:
Betsy Weiss - Vocals
David Loren Burg - guitar, keyboards, saxophone
Larry Monroe Monroe - guitar
Scott Ska Sigman - keys
Ivan Wong, Jr. - bass
Greg Sowders - drums

The sound is amazing for being as old as it is. I hope the other recordings held up as well as this.
They sound like they would've been a great live band and although I love the records it seems they didn't quite do the band justice.

I'm excited to see what else will be posted.

I think American Masquerade is a really top track

In those days, my sister and I would follow the group around town and go to every Boxboys concert. Once that music would start to play it filled our souls and we danced like crazy leaving all the responsibilities of daily life behind. The O.N. Club was one of our main hangouts..

My sister was especially attached to them. She had a terminal illness and this is what she wanted to do up to the end. She died shortly afterwards. Thank you Boxboys for the special gift you gave my sister.