Rare 1990 Demo Captures The Special Beat At Its Peak 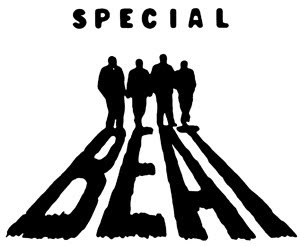 The Special Beat can be credited with helping to nudge the U.S. into its own full-blown ska delirium in the mid-1990's. Rising from the ashes of The Specials and The Beat, The Special Beat was headed by Beat toaster, Ranking Roger and the core of The Specials including Neville Staple, Lynval Golding, John Bradbury and Horace Panter as well as Finny from The Loafers. The band was built as a touring machine (rather than a band that recorded original material) and the original version of the band toured the U.S. extensively throughout 1990 and 1991 releasing two live albums. That said, the band did enter UB40's studio in Birmingham in 1990 to record a 7-song demo that included a mix of inventive covers and a few originals.

Below are two video segments of the band. The first features a studio performance of 'Ranking Full Stop' interspersed with interviews of Ranking Roger, Neville and Finny about the genesis of the band and the second includes interview footage with Ranking Roger, Neville, Finny, John Bradbury and Horace Panter. Of note is footage of the band recording 'Rainy Days' which ultimately ended up on the third and final General Public album "Rub It Better" released in 1995

While all the 2-Tone bands toured the U.S. during the height of their popularity in the late 70's and early 80's, most had split up or called it quits just as they were beginning to make inroads . But those early tours had an effect and impact by spawning legions of young musicians around the U.S. to start their own bands and scenes. Though it took the U.S. a bit longer to have its own love affair with 2-Tone and ska, by the mid to late 80's, there were ska bands and thriving ska scenes in Boston, New York, Philadelphia, Washington, DC, Chicago and Los Angeles. Ironically, members of Special Beat, who had helped to set the stage for a revival of ska in the U.S., returned as conquering heroes playing sold out shows across the country. For most U.S. fans, the Special Beat tour of 1990-91 was the first time many of them had heard songs by The Beat and The Specials performed live.

Below is a segment on Special Beat from the UK music television program 'Rapido' which reported from their first show in New York in December 1990 about the impact the band's tour was having on fanning the flames of ska frenzy in the U.S.

Of special note in the clip above is the inclusion of my band Bigger Thomas. We were the support acts for the New York show and we were included in the 'Rapido' segment about the band's triumphant U.S. return. Indeed, yours truly is interviewed along with my band mate Roger Apollon about why ska has finally exploded in the U.S. There is also a bit of footage of us performing.

The Special Beat recorded an album's worth of demo songs that never saw the light day. The tracks have been circulating around for some time and are now available for your listening pleasure. Interestingly the band opted to record covers (including great versions of David Bowie's 'Golden Years' and Mitch Ryder's 'Breakout' that plays to John Bradbury's strength as a soul drummer) though the originals 'What You Thinking?' and 'Rainy Days' are also quite good.

Special Beat - Demos
Posted by Marco On The Bass at 8:32 AM

Nice, I've been looking for this since they released it way back in the day. I sent off £5 or whatever to order it from them (as advertised in Kevin Flowerdew's 'zine) and it never showed up.

Great VHS resurrections! Of particular interest to me is the RAPIDO segment on why Ska had renewed interest in the US during the late 80's early 90's and the stylin fashions (Stussy hat, Raiders trench coats, etc..) of the Special Beat.

Saw The Special Beat in Toronto, 1990, at a long-gone, short-lived venue on Danforth Ave. (Name of it escapes me.) Spoke to Brad for 20 minutes at the bar. Nice guy. RIP. Fun show.

Saw them at the old 9:30 club in Washington DC. Best show I have ever seen. Period. The joint was jam packed and nobody stopped dancing the entire show.

Toronto venue was the Spectrum. Great club venue back in the day. Was at the Special Beat show in 1990, was insane and one of the best shows I've seen!