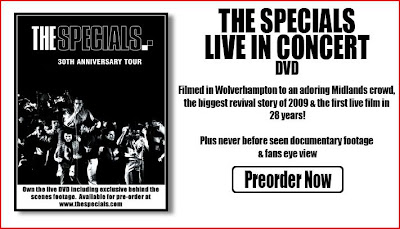 As posted here several months ago, Lynval Golding's daughter Michelle has been busy pulling together footage from the 30th Anniversary Tour for an official DVD documentary release. The DVD will feature the band's show in Wolverhampton as well as behind the scenes footage and a 'fans eye view' of the show. In addition she solicited and received hundreds of photos from fans from 1978-1982 to provide a visual history of the band and its supporters.

Though the band had hoped to have the DVD ready in time for Christmas, there are still last minute edits being made to it. Michelle Golding posted the following on The Specials community forum last week:

Massive thank you to everyone who emailed me photos. As always you guys are brilliant. If I get to do it all over again, I'll be round your houses to look through your boxes of goodies

Anyway, the edits are finished, and being approved so I don't think we will make the Xmas post after all. Not for lack of trying, there were points where people were working 16hr days and then going to the gigs to support the guys.

It will be well worth the wait, it really looks just like being there, beer flying and all

We don't have a release date yet as there are still ongoing tech stuff to do. But as soon as we know you will be the first to know.

Michelle
Pre-orders for the DVD are available through the band's official Web site. Until you get your official DVD in early 2010, you can watch live video from the Wolverhampton show filmed by fans at the show below:


Happy Holidays!
Posted by Marco On The Bass at 5:35 PM