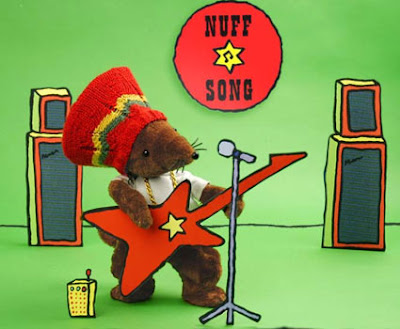 As the father of a 3 1/2 year toddler, I watch A LOT of children's television (my personal favorites include Yo Gabba Gabba and Little Bill).  That said, in honor of the fact that February is Reggae month, I was excited to learn that 'Rastamouse', the popular U.K. children's book series, based on the mystery-solving, reggae-playing, skateboarding Rastamouse, has been turned into a stop-motion animated series airing on the BBC's CBeebies children's channel. A reggae based soundtrack from the series is also in the works and a single titled 'Ice Popp' will be released on February 6th and is available as a streaming preview here (its really good!)

For the uninitiated, Rastamouse and his posse, The Easy Crew which includes Scratchy and Zoomer, are a reggae band who are often called upon to solve problems whenever something goes awry on the island they live on. Read an interview with the book's co-authors Michael De Souza and Genevieve Webster who explain the genesis of Rastamouse and describe the journey of the crime-busting rodent from page to small screen.

Watch a short clip of the first Rastamouse episode 'Da Crucial Plan' which aired in the U.K. this week