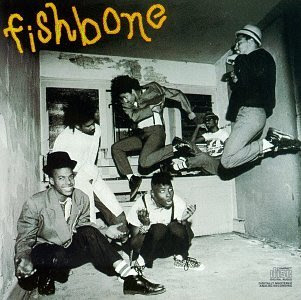 The cover of Fishbone's self-titled, six-song EP release in 1985 remains one of the most iconic album covers of all time. Village Voice music critic Robert Christgau famously opined of the cover, "Looking like postmodern vaudevillians who've just signed themselves in at the mental hospital, with sartorial details appropriated from the Specials, Dizzy Gillespie, Jimi Hendrix, Stepin Fetchit, and whoever, these six black L.A. teenagers show a flair for visual outrage worthy of George Clinton himself..."

Photographed by John Scarpati (who has recently released a book of his photos of bands called "Cramp, Slash, & Burn: "When Punk and Glam were Twins"), the energy conveyed in the album cover photo is mesmerizing.  The six members of the band are crammed into a small, decrepit room.  Two (Kendall and Chris) levitate in mid jump.  Drummer Fish seems bemused by the scene in front of him.  Norwood and Dirty Walt both seem to be summoning some unseen spirits and Angelo, looking straight at the camera, with a big smile on his face, appears to welcome the viewer into the mad, crazy world of the band and the bouncing, kinetic sounds contained on the vinyl grooves inside. The photo is pure visual gold.

So imagine my utter surprise when an outtake from the same photo shoot finally emerged this weekend after 27 years! The newly released photo captures the band in another moment of manic mayhem.  Kendall is in the middle of a perfectly executed Bruce Lee-like roundhouse kick to Norwood's face.  Fish seems to be looking for cover in the corner.  Dirty Walt looks quizzically at the camera and Angelo is covering his face in nervous exasperation.  Chris Dowd covers his face in mock horror.  A case of art imitating life? 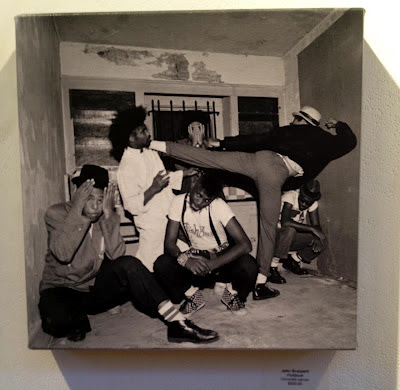 Credit/respect to Alex Gonzales from VEVO, a huge Fishbone fan who saw the photo exhibit, bought the photo, shared it on Facebook, tagged Fishbone members and let thousands of fans see it.

Credit/respect to Alex Gonzales from VEVO, a huge Fbone fan who saw it at a photo exhibit, bought it, shared it on Fbook, tagged Fishbone members and let thousands of fans see it.

I'm glad you shared it though! I want it.

I wanna see it bigger

Thanks for the new shot. I was looking for info on whether the cover shot was trickery or live. Getting the Fishbone outline with two of them mid-air could not have been easy.