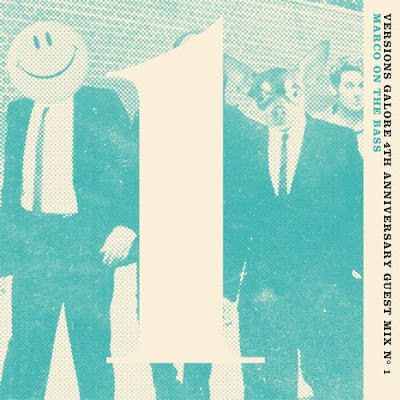 As the late, great John Peel once said, "I know loads of cover versions that are regarded as being better than the original." Its a sentiment that I ascribe to whole heartedly, and one that my fellow music blogger Leopold Stotch, of the excellent Versions Galore has dedicated his time and passion to celebrating.  His blog remains one of the first I visit each day for its incredibly diverse and eclectic batch of the best and most interesting cover versions you will ever hear.  Even better, Stotch regularly posts fantastic reggae, ska, dub and rocksteady cover versions of songs that often surpass the originals in soul, musicianship and danceability.

Stotch is marking the four year anniversary of Versions Galore this week by inviting a number of guest bloggers to submit cover mixes.  I'm honored and excited that he asked me to submit a mix of some of my favorite cover versions and that he selected it as the first mix to be posted.

Here is a link to the mix: Versions Galore 4th Anniversary Guest Mix #1: Marco On The Bass

Below is a little bit about each cover song in the mix:

It’s a Shame – Alton Ellis
The Stevie Wonder penned Motown hit for The Spinners, about a man who complains about a lover “messin” around on him, was memorably covered by Jamaican reggae and rock steady innovator Alton Ellis in 1971.

Tu Gotnisht (Do Nothing) – King Django
New York ska legend and trombonist King Django (The Boilers, Skinnerbox, Stubborn All-Stars) recorded an all Yiddish-language album of klezmer meets ska and reggae songs including this faithful cover of The Specials “Do Nothing”.

For The Turnstiles – Bim Skala Bim
Boston’s Bim Skala Bim, who were one of the first American ska bands to emerge in the early 80’s, recorded a sublimely soulful reggae version of Neil Young’s rocker.

Live And Let Die – Byron Lee
Jamaican music pioneer, producer and leader of The Dragonaires was a fan of The Beatles, recording reggae versions of many of their most popular tracks. He later recorded this incredibly soulful version of Paul McCartney & Wings theme song for the James Bond movie of the same name.

We Gotta Get Out Of This Place – The Ska-Dows
The Ska-Dows were one of the many U.K. ska bands that sprouted in the wake of the 2-Tone explosion. Signed by Chas Chandler, bassist of The Animals to his Cheapskates Record label in the late 70’s, the band recorded a rollicking ska version of The Animals hit from 1965.

Happy 4th Birthday Versions Galore!
Posted by Marco On The Bass at 9:07 PM