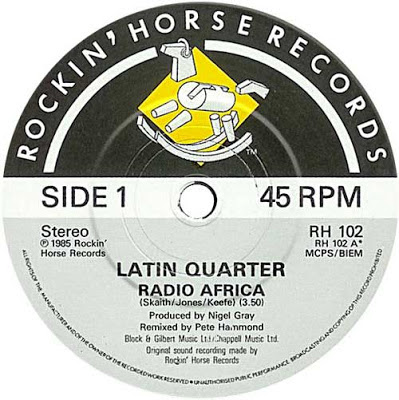 No one prepared me for how wet and dreary England can be in January.  I arrived at Essex University in Colchester in early 1986 during a rain storm that seemed to last a week.  It was still winter break, so the bleak campus (situated next door to a British Army base that trained soldiers for duty in Northern Ireland) was even grayer and more desolate than usual while most of the British students slept off their New Year's hangovers back at home.

As one of a handful new American students, I was placed in an aging tower block with a small group of international students and first years from across the U.K.  Those first few days in a tiny cinder block room were a complete culture shock, as I realized I would be on my own for at least 10 days before any classes would begin. So with just my books and a small radio/cassette player to keep me company, I listened to BBC Radio One and Radio Caroline day and night while I filled my time writing homesick letters to family and friends. 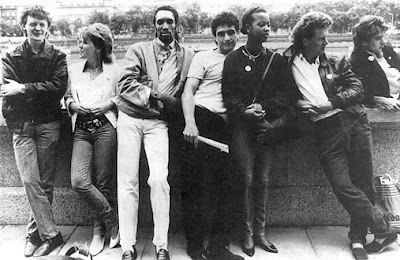 It was during those extended hours of listening to mid-80's, British pop and rock music that I noticed an incredibly mournful, but excessively catchy pop reggae track "Radio Africa" by a band called Latin Quarter.  Sounding like a cross between UB40's "Food For Thought" and Billy Bragg's political tinged folk songs, "Radio Africa" lamented the social and economic impact of Western economic aid on the state of newly independent African countries who struggled with crushing debt payments, Dictators, civil war, famine and the horrors of apartheid.

I was transfixed by the song, which sounded like a political science and history class set to a reggae beat.  In fact, the lyric writer for the band, Mike Jones, was a former University history professor who sent his words to the band's singer and guitarist Steve Skaith.  The song was everything I hoped I would discover on my musical journey while living and attending school in the U.K. and it got me through those first few difficult weeks of a lonely time. And when I happened to catch the band performing on Top Of The Pops a few days after hearing them on the radio, the bands performance appealed to my yearnings for 2-Tone music.

They've still got trouble with a monster in the South
Heads buried deep in that lion's mouth
Like a jaw snapped shut, it keeps them apart
If that jaw got broke it would be a start.

The West still complains about the foreign aid
They'd do better to change the terms of trade.
More tanks than food in the Ogaden
It looks like Moscow got it wrong again.

Mozambique and Mugabe
Still got Frelimo I hear them say
But "Exchange" means...
Recession" means",
It all means "Harder to take".
Tanzania should be moving up a gear
Instead they've got to step on the brake.

Can't stop a movement that's come this far
But "Lending" means."
"Interest" means",
"Harder to Fight"
Independence has a hidden expense
When the hands on the purse strings are white.

Indeed, in a post 2-Tone records era that came to an end during the Reagan Administration back at home and the height of Thatcherism in the U.K., "Radio Africa" (which was included on the band's excellent but overlooked album "Modern Times") quietly channeled the socially conscious rage of the The Clash, The Specials and The Selecter into an intelligent and thoughtful meditation on geopolitics. As it turned out, the band and "Radio Africa" made an impression on the British music buying public, reaching as high as #19 in the charts.

Nevertheless, Latin Quarter was an anomaly in the world of pop music -- and musically "Modern Times" was very diverse - rock, reggae, dance and ballads. Just as the musical style was diverse so were the songs topics including McCarthyism, football violence, imperialism in Africa, racism and the social ills of the U.S. With striking artwork from James Swinson that eerily foreshadowed 9/11, Modern Times" remains a classic album.

Unfortunately "Modern Times" was never heard by a large selection of the UK record buying public because of the nature of daytime radio broadcasting in the UK. A good case in point was the haunting "America for Beginners", it received outstanding reviews on Radio 1's record review by the presenter and all the musicians on the show but received no daytime airplay essential for chart success.  So although "Modern Times" sold well in Europe and went top twenty in several countries including Germany it didn't achieve the same success in the UK.

Amazingly, Latin Quarter recently reformed in the last year to tour the U.K. and Europe. Their songs still remain relevant. Check out the reformed band performing an updated 21st Century version of "Radio Africa" below: