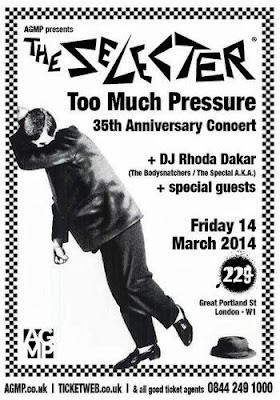 The Selecter (who are currently on tour with PIL in the U.K.) have just announced a 35th Anniversary "Too Much Pressure" UK tour next spring to celebrate the release of the seminal 2-Tone album in 1979.

The band will perform all the songs from the album, followed by an extended encore of classic and contemporary songs. Since the band have re-formed, they have never played the album in its entirety, so this is being billed as a special gift to the band's fans, who’ve supported them over the past three years. Tickets for the tour are now on sale. Here's to hoping that the band decides to bring this tour back to North America at some point.

TOO MUCH PRESSURE 2014 UK Tour dates