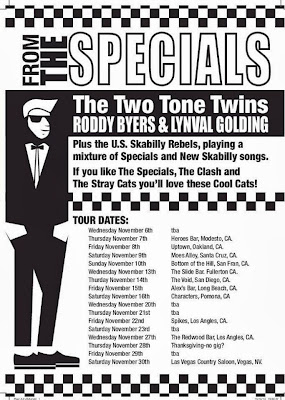 Brothers in arms from The Specials, Roddy "Radiation" Byers and Lynval Golding have just announced they are playing a west coast tour of the U.S. during the month of November! If you missed The Specials on their most recent North American tour this past summer, then you now have a chance to catch the two as they play stripped down versions of the band's best known songs.

Not sure what to expect? Check out video from earlier this summer when Roddy and Lynval played an intimate solo show here in New York City that my ska blogging partner Steve Shafer (Duff Guide To Ska) and I organized as part of our Electric Avenue ska showcases.

According to Lynval, this was the very first time that he and Roddy had ever performed together like this, and while Roddy joked that it should be the last time! "Hey Little Rich Girl," and "Rat Race" which were penned by Byers, and particularly "Doesn't Make It Alright" (which Lynval sent out to George Zimmerman) took on a haunting and emotional quality. The fact that the band's U.S. tour is very likely it's last and that the overall future of the band who have been playing together since reuniting nearly 4 years ago is uncertain, added to the poignancy and power of these versions of the songs.

Thanks for this exciting news! I'll have a chance to catch them at the November 14 gig here in town.