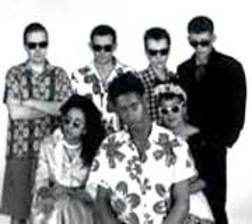 While many casual fans of 2-Tone know about the glory days of the label and of The Specials at their peak, the other story about the label and the band in decline is just as fascinating and the material recorded for the band's final swansong, "In The Studio" remains and overlooked gem with several stand-out tracks.

With the departure of more than half of the group in 1981 to form Fun Boy Three, Jerry Dammers, Horace Panter and John Bradbury, were left with the dilemma of how to keep the spirit of The Specials alive. After a short trip to Germany to back Rico Rodriguez, the three remaining Specials returned to the UK to sort matters out. Because of legal red tape, they could no longer use the name The Specials, so they reverted to the old Special A.K.A. moniker.

The first project was to record a single with Rhoda Dakar, 'The Boiler', which Jerry had first attempted early in 1981. The song was an old Bodysnatchers number, a harrowing tale of rape, and despite a great production, it was never going to feature on too many radio play lists. The single was released in January 1982, and credited to Rhoda With The Special A.K.A. Horace didn't actually play on the record, his place being filled by ex- Bodysnatcher Nicky Summer, and a new guitarist, John Shipley of The Swinging Cats was also present.

The record got a lot of attention, if not airplay, due to the sensitive subject matter, and eventually reached a very credible No.35 on the chart. A follow up single 'Female Chauvinist Pig' was planned but never emerged. Instead the next single to feature the band was 'Jungle Music', by Rico And The Special A.K.A. A catchy number that despite some good airplay failed to chart. Jerry, Brad and Horace also contributed to Rico's second album for 2-Tone, 'Jama', released in May '82.

Dammers tried to rebuild by signing two new bands, first The Apollonaires, and then The Higsons. Both bands had leanings toward jazz funk rather than ska, and it came as no surprise when the 4 singles that the bands issued all failed to chart. A new look Special A.K.A. soon appeared. Dammers had recruited vocalist Stan Campbell, and a friend of Rhoda's Egidio Newton, to provide vocals, and Gary McManus joined shortly after to replace Horace on bass, who had decided to call it a day.

The band released a new single 'War Crimes' in a flurry of publicity, but like 'The Boiler' previously, the subject of the song prevented it from getting the airplay it deserved. 'War Crimes' became the first single by The Specials not to gain any chart placing. Dammers however, was happy to sacrifice commercial success to get his message across.

The next move was to take the band into the studio to record a new album. It was a long hard process, and the first that the public got to hear of their labours was 8 months later, in August 1983, when the single 'Racist Friend/Bright Lights' was released. The single found Roddy Radiation making a guest appearance on guitar, and took the band to the lower reaches of the chart, with a No.60 chart placing. (Roddy later revealed that he did not actually play the lead guitar solo that features prominently on "Racist Friend", instead it was lifted from a demo of the song he had played on earlier. He never actually set foot in the studio, having had a falling out with Dammers.)

The inspiration for 'Racist Friend' came from Jerry's observation that the more famous he got, the more friends he accumulated. He found he was seeing less and less of his family and real friends, and spending more time with the hangers on. One day he took out his address book, and as a starting point to decide who to get rid of, he scribbled out the name of anyone with racist tendencies.

The other side of the single, 'Bright Lights' summed up Stan Campbell's attitude to the band perfectly. The lyric goes along the lines of moving to London and joining a band, with the naive belief that "the streets really must be paved with gold". Campbell joined the Special A.K.A. expecting immediate fame and fortune, after all he was working with the guy who started 2-Tone. When this success was not forthcoming, Campbell became very irritable, threatening to quit on an almost daily basis.

To make the recording of the album even more stressful, some members of the band lived in Coventry, while some still lived in London. Just getting the group together was a nightmare. Rhoda also has unhappy memories of the recording: "My memories are of going home in tears after singing one line of a lyric over and over for about five hours. I went home sobbing in a cab most nights." With the recording costs beginning to rise at an alarming rate, Chrysalis tried to recoup some of the cash by issuing the compilation album 'This Are Two Tone'.

The next thing to emerge from the studio was the classic 'Free Nelson Mandela' single in March 1984. The recording, produced by Elvis Costello, also featured Lynval Golding, now a free agent after the Fun Boy 3 split, and Ranking Roger and Dave Wakeling, formerly of The Beat. The single brought the plight of the ANC member to the attention of many for the first time. If 'Ghost Town' was Dammers greatest commercial success, 'Free Nelson Mandela' was his greatest artistic achievement, although he rarely gets the credit for it he deserves. The record shot to No.9 on the chart, and Jerry was soon busy organising the Artists Against Apartheid' concert on Clapham Common. The Special A.K.A. did not appear on the bill, possibly because Stan Campbell had finally quit the band shortly before the release of the new single.

After two long, hard years in the making, the Special A.K.A.s 'In The Studio' album was finally unveiled in August 1984. It had very little new material as half of the tracks were already available as singles, and another, 'What I Like Most About You Is Your Girlfriend', was released in September. 'What I Like Most...' actually featured Jerry on lead vocals, and the video was a classic, with Dammers playing the part of an alien who comes to Earth and takes an instant attraction to another guy's girl in a bar. The single, which struggled to No.51, was to be the last from the 'original' Specials camp. 'In The Studio' proved a financial disaster for Chrysalis, and the last that anyone saw of the Special A.K.A. was on Channel 4's Play At Home series, where the band made a video for each of the tracks from the album.

Here are videos for the songs "Nelson Mandela", "Racist Friend", "Housebound", "What I Like Most About You Is Your Girlfriend", "Alcohol", "The Lonely Crowd" and "Break Down The Door":

Here is the track listing and the download link is below:

The Special A.K.A - In The Studio

Thanks to Andy Clayden of The Ska, Rocksteady & Reggae web site from which much of the background and history of The Special AKA for this post was derived.
Posted by Marco On The Bass at 12:28 PM