Help Me Interview Lynval Golding of The Specials! 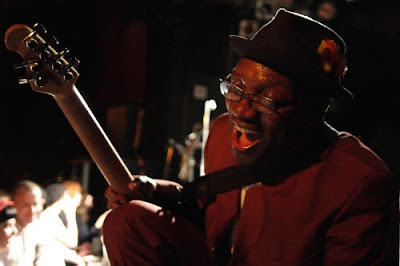 Though I haven't posted as frequently in the last few weeks its not because I haven't been busy working on a few big things for this blog (keep your eyes open for something with Pauline Black of The Selecter). Luckily for me, my own life as a ska musician has brought me into contact with a lot of my musical heroes. In particular, members of 2-Tone bands that I have met, opened shows for and shared a dressing room or meal with have been among the kindest, most accessible and truly down-to-earth people I have met in the music business.
One who has made a real impression on me is Lynval Golding of The Specials. The times I have seen him he has been nothing but gracious and a genuinely positive person. He has always had a kind word for me and my band and has been very open about sharing his past experiences playing in The Specials, Fun Boy Three and all the other musical projects he is involved in (Pama International, appearances with Lily Allen, Dub Pistols, etc). I also like that Lynval is all about promoting ska and reggae music and that he is a driving force behind the current reunion of The Specials.
I recently approached Lynval about doing a traditional interview with me for the blog and he agreed. As I planned the interview I had an idea. Lynval and his friend Elizabeth periodically post video clips of Lynval on YouTube that include him providing updates on The Specials reunion, his take on the 2008 U.S. elections and some footage of him in the studio working on some new songs. I asked Elizabeth if she would help me by asking my questions of Lynval during one of their next video sit downs. She and Lynval liked the idea and agreed. Then I suggested collecting questions from readers of this blog and picking the best ones (similar to what they do in MOJO Magazine) and mixing in a few of my own. Voila! A multimedia interview where everyone has a chance to ask Lynval a question.
So, please share your questions via the comments page (include your name and where you live) and I'll select the best and most interesting ones to share with Elizabeth when she sits down with Lynval in December. The video will be posted here once it is complete.
Look forward to getting your questions.
Posted by Marco On The Bass at 9:21 AM

Lyunval seems like such a nice guy. I saw him play with Pama International at the Boss Sounds reggae festival a couple of years ago. I was looking at the record stalls there and noticed Lynval. Obviously, I went up to meet him. Before I could say anything he noticed my Beat t-shirt and said 'Hey you have the t-shirt. I just did a tour with Dave Wakeling and Pauline Black'. Needless to say I was speechless!

Anyway, I was wondering if you could ask Lynval some (or all) of the following:

Which bands and/or musicians has he most been inspired by throughout his career?

How did the Sunday Best collaboration with Pauline Black come about? Were there any plans for any more Sunday Best singles or an lp?

Why did the 'Guilty 'Til Proved Innocent' lp not see a proper UK release?

Everyone always asks about the Specials but no-one seems to mention Fun Boy Three. I think they were amazing. Could you ask about the first Fun Boy Three recordings and about recording the 'Waiting' album with David Byrne? I can never find any info on Fun Boy 3!

Plans for the future (other than the Specials tour(fingers crossed!!)?

If the Specials do tour, any chance of playing 'Why?' This song still needs to be heard today. Especially with the rise of the BNP in the UK.

Hi Liam - Thanks very much for the questions. All of them are great. I do plan to ask Lynval about both Sunday Best and FB3.

I'm with Liam about wanting to know the musical inspirations and his motivations...

Could you ask him about what it was like in Coventry as a lad and how his family came to be there from Jamaica? Give us a history lesson Lynval!

Who taught him to play guitar?

Were the Equals in any way an influence on him as a kid? Has he ever shared a stage with Eddie, Derv or Lincoln?

And does he keep in touch with Saxa from the Beat? How is he?

Thanks for the opportunity to ask, Marco!

- Ian in the Mountains of Canada