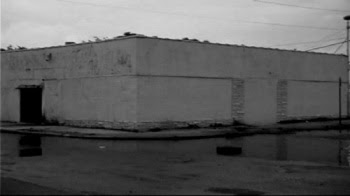 For anyone who grew up in the 80s in the suburban wastelands between New York City and Philadelphia and was a fan of punk, ska, reggae, hardcore and alternative music of all stripes, the storied bills that City Gardens regularly featured are the stuff of legend. Located in a warehouse-like space in a borderline dangerous neighborhood in Trenton, New Jersey (see beautiful picture of the club above), City Gardens was a massive space where touring bands as varied as Nirvana, Dead Kennedys, The Ramones, Black Flag, The Pogues, Fishbone, Toots & the Maytals, Bad Brains, and Ice T could make stops and draw hundreds of kids from across suburban New Jersey and Pennsylvania. Anyone who had an interest in non-mainstream music during the 80's and early 90's (but who lacked the ability to get to New York to the north or Philadelphia to the south) could find what they were looking for at 1701 Calhoun Street.

I was recently interviewed for the book that is being written about the club. 'No Slam Dancing, No Stage Diving, No Spikes: How City Gardens Defined an Era' by Amy Yates Wuelfing and Steven DiLodovico which will chronicle the club's key role in alternative music history. You can read a chapter from the book about the infamous Buthole Surfers show in 1987. An excerpt from my interview appeared this week in the Charlotte Indie Music Examiner. The book will be available for sale in early 2010.

City Gardens had its share of problems. People complained about the door prices, and for a while, the threat from the local skinhead population threatened to shut the club down after a number of violent episodes. On the upside, the clubhouse-like environs fostered by its proximity to the suburbs exposed a lot of very young people to a pretty radical range of sounds and ideas (myself included). Its fair to say that my experiences seeing a variety of diverse shows at City Gardens molded me into the musician and the music fan I am today. 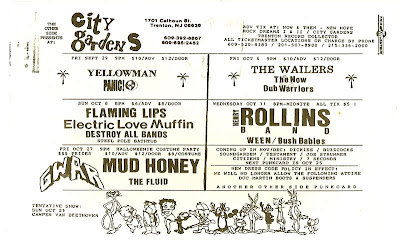 As a young ska aficionados in the early to mid 1980's, the best part of City Gardens was the number of ska shows that the club booking agent Randy Now booked. He was clearly a fan of the genre and he went out of his way to bring in local and regional bands from NYC and Philly. It was always easier to wait and see these bands when they came to Trenton then to trek into CBGB's or The Ritz in New York City and it made me love the club even more that they came to us in New Jersey.
My love and passion for ska led me to start my band in New Brunswick, New Jersey while I was a student at Rutgers University. In fact, it was a chance meeting that the band's singer Roger Apollon and I had with Steve Meicke (our original sax player) at a Ranking Roger show at City Gardens in August 1988 that took our band (then known as Panic!) from the planning stages to reality.

Somehow Randy Now heard about our little ska band making some noise in New Brunswick and New York in the fall of 1988 and spring of 1989 and he offered us a show opening for Boston's Bim Skala Bim in March 1989. We must have made an impression because he kept on booking us for the next 2 1/2 years until the original band split after a bittersweet gig opening for our musical heroes The Special Beat in September 1991.

whatever happened to Randy? i met him once at a show he booked in bordentown a few years ago. the show was The Flamingos/HCS/Bigger Thomas. it was actually the first time i ever saw you guys. he seemed like the nicest guy in the world from what i saw of him that night, and i never saw him again. He also used to post on njska way back when. haha

also cant wait to get my hands on this book, i used to look at pages and pages of those bills and get so jealous.

Randy is a great guy. He is doing well and is booking shows called The Living Room Concert Series at The Record Collector in Bordentown. He's brought a lot of great acts to the little record store in town. Check out the Record Collector on the web, come out to a show and he will be there.