It's Madness! - BBC Plans To Air 5 Hours Of Madness Programming on October 2nd 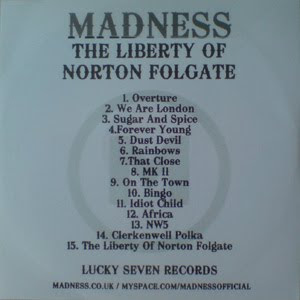 Madness fans rejoice!  BBC 4 in the UK plans to air five hours of Madness related programming on October 4th.  The highlight of the evening will be Julian Temple's recent film of the band performing their entire new album 'The Liberty of Norton Folgate' live at several shows in London earlier this summer.  The night will conclude with the band's seminal 1981 film 'Take It Or Leave It'.
Here is the description of the night's activities from the BBC: 'Music Madness invite you back to the golden era of Cockernee music-hall knees-ups, as they star in the film of their recent album. Director Julien Temple (Absolute Beginners, The Filth and The Fury) adds impressionistic vignettes of dark, seamy London to footage of the band playing the album at Hackney Empire, surrounded by costume hecklers ("Crippen was innocent") and Pearly Kings. It's the perfect context for an LP that, more than any Madness record, tells bittersweet tales of life as it's lived in the capital, on songs including NW5, We Are London and Clerkenwell Polka. A Madness night is completed by the bands performance at this years Glastonbury festival at 9pm, and the re-run of Young Guns Go For It profile of the group at 10pm.'
The good news is that any overseas based fans of the band can watch this live from the application on this link which streams British television programming over the Internet
http://www.myp2pforum.eu/live-tv/41045-british-tv.html

Great news Marco. How the hell do you manage to hear all this before us.......
Keep it coming.

Thanks for the link, Marco. This is great to watch any UK channels! I feel like I just got free satelite tv! Old Mod in Hollywood.

Marco
How can I obtain a copy of this excellent 5 hour showing, missed recording was atg work.
Marcus