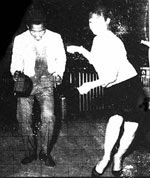 Ah The Beat Girl... If it was possible to be very attracted to the inanimate cartoon logo of a band, than count me in. Indeed, I spent much of my college years looking for a girl who looked, dressed and had the same sexy allure as The Beat girl. I had to settle for wearing her on a Beat t-shirt that was my most favorite band shirt of all time. I have the badly stretched out and tattered remains of it in a drawer somewhere.
When it came time for The Beat to create a logo for their first album and for marketing posters and advertisements they called upon Hunt Emerson. Born in Newcastle-upon-Tyne, cult cartoonist Hunt Emerson has lived in Birmingham since 1971. He has drawn cartoons and comic strips since the early 1970s providing a grown-ups alternative to the Warner Brothers cartoons of Chuck Jones, with characters like Alan Rabbit (AKA Bill the Bunny), Max Zilion, Victoria Stork, Calculus Cat and Firkin. Additionally, his comics have appeared in numerous comic books and magazines, but in particular his Phenomenomix strip has appeared regularly in the Fortean Times since 1979, and his two page adult feature Firkin has appeared in the British soft-porn magazine Fiesta since 1981. Most recently he has illustrated children's books for Walker Books and drawn Little Plum for The Beano. 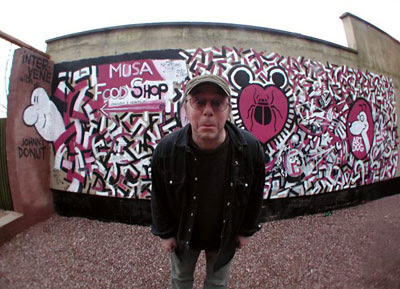 As a result, it was quite a coup for The Beat to work with Emerson. A quick trawl of the web and newspaper archives easily gathers a host of acclaim: "the funniest cartoonist in the UK"; "one of the greatest surreal cartoonists"; "Britain's national treasure"; "quite simply Britain's funniest and most visionary cartoonist"; "one of the best and weirdest British comic artists ever"; "England's finest. Full stop."; "one of the world's top comic artists"; "for sheer penmanship there are few who can touch him"; "Why isn't this guy a household name?", and of his Citymouth strips, "definitely the product of a mind on a wavelength untouched by most humans." For a detailed interview with him visit d-log.com.
Emerson drew the Beat Girl from an original photo of a woman dancing with Prince Buster in Jamaica in front of a juke box in the 1960s (see above). You couldn't tell if Beat Girl was white, black or Asian. That was on purpose. According to an interview with Emerson, "You know the story about the old '60s photo I spotted in a newspaper of Prince Buster dancing with the Beat Girl. I don't know who she was - she was never identified by us. I wonder where she is now - probably fat with six kids... The Beat wanted a logo and I wanted to do something to rival Jerry Dammers' Walt Jabsco; I was so envious of that perfect bit of design and marketing. Well, The Beat got their logo, which is still very much recognised, but I don't think she was as good as The Specials...but of course, not many were as good as the Specials, were they?"

According to Dave Wakeling: "The Beat Girl image had a real purpose. Our early shows were mainly dominated by males. And of course they were drinking, so there were a lot of fights at the shows. That was the reason why we had the Beat Girl. We hoped the Beat Girl logo would draw more women to the gigs. With women there, the guys would stop trying to break each others noses. They'd dress a little more dandy and be on their better behavior to impress the women. It worked." Within 3 months of inventing The Beat Girl, we got loads of girls in Beat Girl costumes at our gigs. With all the skinheads showing off like crazy to the girls, we hardly had any fights after that."

Later Emerson created a gigantic painting of the band showing them being engulfed by a multi-coloured tidal wave. The mural, which was created during an all-nighter ended up being the front cover of the band's second album "Whappen" when the band couldn't make up their minds on anything else. 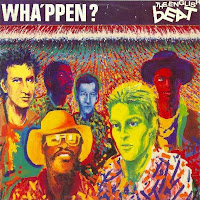 In addition to his acclaimed work as a cartoonist, Emerson plays guitar and sings in a band called Hunt Emerson & The Hounddogs. Here they are live performing 'Money' and 'To Love Somebody':

You can learn more about Emerson and purchase his cartoons and art work at his web site Large Cow.
Posted by Marco On The Bass at 7:42 PM

Hunt is a genius as a cartoonist. We need a pictoral history of the changes in birmingham. Hunt!s the very man to do it

But does she have a name??