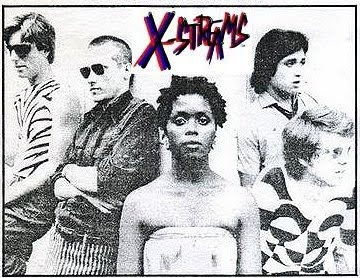 I'm happy to report that the surviving members of The X-Streams, an incredibly talented but overlooked 2-Tone era American ska band from the early 80's, have finally made some amazing unreleased demo tracks they recorded in Los Angeles in 1980 with noted Warner Brothers producer Paul Wexler (son of Jerry Wexler) available for all to hear.
The X-Streams, were an Arizona-based ska band that played a part in the resurgent Los Angeles ska scene of the early 80's that flourished around the O.N. Klub. They remain the band I wished I had seen live and their story is one that continues to draw me in. Perhaps because they came so close to success before self-destructing. Perhaps because they brought an energy and intensity that was both mesmerizing and a little bit frightening to those who saw and heard them. Perhaps because for one brief moment they may have been the best hope for what an American 2-Tone era ska band could have been. 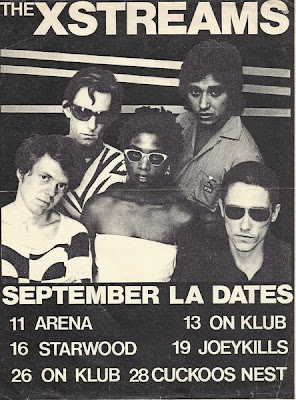 The band coalesced around Bob Steinhilber (drums), Peter Tessensohn (bass), Steve Kriol (guitar) and Lorraine Springer, a young woman from Trinidad on lead vocals. Springer had met Kriol in California and travelled with him to Arizona to start the band. The addition of local guitarist Kurt Mayberry was the final ingredient that took them to the next level, but also complicated their future. Much like Pauline Black and Neol Davies in The Selecter, it was the vocal interplay and energy between Springer and Mayberry that set The X-Streams apart and captured the attention of LA-based producers and music industry veterans, who for a short time, were captivated by the band's live energy and their edginess.
Sadly, The X-Streams were plagued by infighting, drug addiction, a nasty love triangle involving Springer and the band's two guitarists and a penchant for self-destruction that seemed to keep them from ever reaching their full musical potential. Nevertheless, they made a mark for themselves in Arizona and L.A. and are best remembered for their raw and edgy take on new wave styled ska. 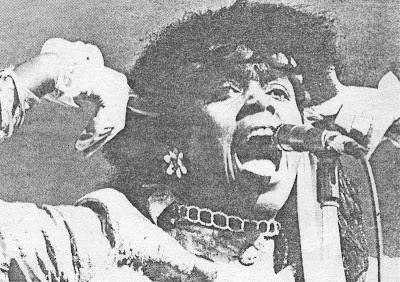 Now at last its possible to revel in the incredible vocal talent and artistic performance of Lorraine Springer. Her vocals and lyrics are marked by an intensity and anger that are breathtaking. Backed by the band's edgy ska meets punk vibe, all the bands best songs revolve around her performance. The band's cover of Sugar Minott's 'Hard Time Pressure' becomes a story of The X-Streams trials and tribulations during their time in Los Angeles. Their 'Rec A Pum Pum/Wet Dream' is a cover of Prince Buster's 'Wreck A Pum Pum' which segues into Max Romeo's 'Wet Dream' and gives Springer a chance to flaunt her own sexuality. Their clever cover of Third World's song 'Rhythm Of Life' makes the song their own and remains the best 2-Tone era song you've never heard and the hard-hitting ska of 'Games' (which seems to document Springer's complicated personal relationship with her in-band lovers) gives Pauline Black and The Selecter a run for their money. Springer shines on the the aggressive punk of 'Be A Boy' where she fantasizes about changing her gender to enjoy the benefits of being a man. The weird, indescribable but captivating 'Fairies In The Mountain' imagines 'No sex, no race, no color, no creed'. All the intensity is balanced by 'Pretty Baby' which had all the ingredients to be a hit on FM radio. It's an amazing performance that has been hidden away for 30 years and can now finally be heard.
The band has created a ReverbNation page with all these songs plus others that were recorded after Springer left the band. You can listen to them there or on the player below. If you register for the band's e-mail list you can download a song for free.

The X-Streams have also released a CD of their later post-Springer tracks called 'Cloud 10' which you can listen to and purchase from Amazon.com:

Wow! Really good stuff. Way too bad that they didn't make it bigger at the time...

Being from Arizona it is amazing to discover this band. Thank you for your blog and amazing interviews and details. I only wish I could of seen them live back in the day. Loraine has an amazing voice and I love the 2tone sound!

Thanks Steve and Jared! The X-Streams were a great band and Lorraine is one of the great unrecognized voices of the American ska and music scene.

These demos are so good. I think I like them better then the 7", I definitely like this version of Rhythm of Life better than the one on the single.

Hi Marc, I have been speaking with Loraine... today even..its all in the making.

I think this is probaby the first cover of Third World's Rhythm of Life that I've ever heard; interesting version of a classic song.

Hi Nehama! I had no idea it was a Third World cover! Thanks for letting me know. I agree that the band did a great job of making the song their own.