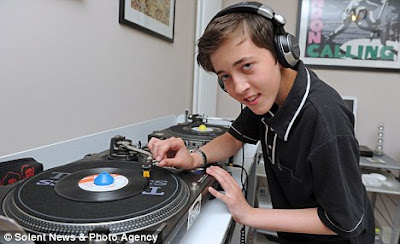 The U.K. media are all reporting about 12 year-old Ted Lavender, who DJ's under the name 'Ted at the Controls', who will be entertaining guests with his selection of ska and reggae tunes at Lily Allen's wedding this weekend. Apparently young Ted only started DJing a year ago and now practices mixing his favorite ska and reggae vinyl on decks in his bedroom.

According to the Daily Mail story yesterday:


He got his first break when he played a slot at the Endorse It music festival in Blandford, Dorset. That was followed by a guest appearance at a benefit gig in aid of the musicians' charity Strummerville, set up by the widow of Clash legend Joe Strummer. Club night promoter Dave Clark, who was in the audience, was so impressed he booked Ted for the Hipshaker tent at the Isle of Wight Festival next weekend.

Apparently Ted has already picked out his top tune for his festival début next weekend - the 1976 classic Police and Thieves by Junior Murvin.

Read more about Ted At The Controls here and here.
Posted by Marco On The Bass at 11:16 AM

I think I read in the Sun that he is related to Ms. Allen...so the choice of him to DJ isn't as left field as it seems. Still, a nice story. Best of luck to him!

You are correct Steve! Ted At The Controls is related to Miss Allen. Still the other gigs he is getting suggest he may be a prodigy!